4 Buy a $16 Million LA Penthouse, Get a 5-Car Supercar Garage from McLaren

5 World’s Only Raiders Harley-Davidson Has 150,000 Swarovski Crystals
Up Next

Elena Gorgan
When your dream home is a lavish mansion with Renaissance-inspired finishes, any custom garage won’t do. You need the best, and, in this particular example, the best is synonymous with a $2 million garage that doubles as a ballroom.
35 photos

Most people turn whatever space is left empty in their garage into an additional storage room, while others use the space exclusively for their cars. The couple behind the so-called ballroom garage, the only one in the United States, is putting a new spin on the old idea of a custom garage.

This is not a man cave in disguise or a collector’s dream come true or even a place where a car lover can spend quiet time with friends or on his own, tinkering away. It’s a proper ballroom so, if you remove the eight cars you would normally put in there, you get enough room to host a party for up to a couple of hundred people. The ballroom garage also has its own kitchen and separate men's and women’s bathrooms with multiple stalls, hidden behind a white, hand-carved Carrara marble screen. In short, it’s a ballroom. But also a garage.

Few would associate the fanciness of a ball with anything even remotely related to car storage, but clearly, Shelley P Brose and her husband are not among these few. Shelley is a certified interior designer and architect with a soft spot for the Renaissance style, as her former home proves beyond a trace of doubt. It’s called Villa Rosa Rugosa, and it’s very famous for the aforementioned ballroom garage. You can see a video highlighting this particular feature at the bottom of the page.

The mansion was completed in 2003 and is situated in San Juan Capistrano, California. It offers 13,000 square feet (1,208 square meters) of the living surface spread between the main mansion, a couple of guest casitas, and a poolhouse. The property is an 8-bed, 12.5-bath residence that also boasts, in between private loggias, an expansive Italian garden, a wine cellar, 13-people 4D cinema, and gourmet kitchen, the ballroom garage that cost $2 million to build.

As the Brose couple explains in the video, the most difficult part about the construction of this marble showpiece was putting together the marble floor. It is the largest piece of marble mosaic in a private residence, and it took two years to put in by hand. It’s in perfect company with hand-painted Renaissance-inspired murals, gold leafing on the ceiling, crystal chandeliers, matching artwork, and hydraulic barn-style doors.

As noted above, adjacent are two bathrooms and a kitchen, both of which come in handy when the space is vacated of cars and turned into a ballroom. The Broses’ son held his wedding reception here, with urban legend saying some 500 people fit in the vast room. The number seems like a stretch, but the place is definitely spacious. As a garage, it can fit between 8 and 10 cars.

“I think the first time we brought cars in here, we both held our breath,” Shelley says of the garage, which she describes as “a tad bit decadent, I agree, but it’s very useful.” Simply putting marble on the floor of a room and calling it a garage is not enough.They had to make sure the marble could withstand the weight of the vehicles, and that they could fix whatever damage caused by leaks within 24 hours.

If you’re wondering why anybody would go through all this trouble for a garage, the obvious answer is that it had to match the rest of the house. Villa Rosa Rugosa may be a lot of things, but basic it is not: it’s packed with marble columns, hand-carved woodwork, crystals, and leather, artwork, and custom furniture. It’s the kind of place Versace would love. Or a Russian mobster, or even the director of a new haunted horror movie.

The mansion, garage and all, were listed for $15 million in 2008, with the deal including every piece of furniture and art shown in the gallery. Despite the publicity generated by the decadent garage, it failed to sell and, after going into foreclosure, it eventually sold for just $4.7 million. In December 2019, it sold again, this time for $5.75 million. 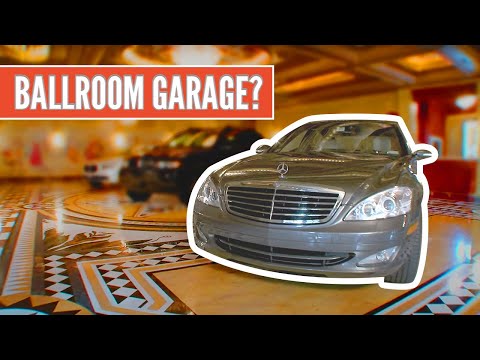