3 Buy a $16 Million LA Penthouse, Get a 5-Car Supercar Garage from McLaren

Elena Gorgan
If you can afford a very expensive luxury car right off the production line, you’re in the target demographic for a new class of real estate: custom garages. So how about a custom garage for your brand new GMC Hummer EV?
8 photos

The first batch of the 2022 GMC Hummer EV, called Edition 1, isn’t starting deliveries until later this year, in the fall of 2021, so you still have time to build that garage for it. Interior designer Kelly Wearstler has a suggestion, and it works perfectly if you’re a millionaire and happen to dig living in the Californian desert.

On a more serious note, Wearstler is the latest brand ambassador for the GMC Hummer EV, the first all-electric Hummer ever, a “supertruck” that’s already getting enthusiasts so fired up about it that one of them agreed to pay $2.5 million for VIN 001. Even LeBron James is in the game, having long been brought in as brand ambassador.

A supertruck like this one deserves an equally impressive garage. And this is exactly what Wearstler delivers, though only in digital form, for the time being. It’s a live-in garage, which is to say, a garage that’s integrated within the home, which helps the car (or cars) stand out by placing them in the center stage, much like works of art.

The idea of in-home garages or car displays is, of course, not new. It’s been done for decades, either in homes or apartments, where glass elevators bring up your most valued possession, and you can admire it from the comfort of your living room. This is no different—except perhaps in the sense that, with the Hummer EV, you’re sharing the space with it and not the other way around.

Wearstler tells Dezeen (she’s also a judge of the Dezeen Awards 2021) that she drew on a bunch of stuff for inspiration. She wanted to create a space LeBron James would like living in, “a super sexy home in the desert where his vehicle is a sculpture.” Man and machine living in harmony.

She wanted a building that would blend retro-futurism with luxury and the clean conscience that comes with driving an all-electric vehicle. She looked to the shapes and colors of ‘60s and ‘70s movies, particularly Ridley Scott’s Alien and Stanley Kubrick’s 2001: Space Odyssey. She was also inspired by the Hummer EV itself, like its bronze finishes and clean lines.

The result is on display in the video at the bottom of the page. The garage slash home (both for human and the machine) lies in California sandy hills and arid landscape. It stands out from it, but at the same time, all its edges are integrated into it. The entrance is through sliding doors resembling an H, which reflect the gorgeous design of the Hummer, and through a sensor-controlled canyon-style channel.

Once inside, the supertruck is placed onto a turntable lift, which takes it to the upper floor. Lighting is an aspect that, by default, Wearstler pays attention to, so this garage has a slanting roof that helps with showing off the vehicle. Further proof that the Hummer EV is getting the centerpiece treatment is that Wearsler placed virtual versions of actual pieces of art next to it. There’s her Monolith side table and Echo bench, the Etcetera chair by Jan Ekselius, and Mario Botta’s Quarta lounge chair. You won’t be lacking places to sit to take in the beauty of the Hummer, that’s for sure.

“My vision was to reinvent the way that we live with our vehicles, which are embedded in the fabric of our daily life,” Wearstler says of her concept. “The Hummer EV has no emissions so it makes it possible for us to live with it harmoniously; I wanted to imagine architecture that brings it inside so we can truly enjoy its beauty.”

Wearstler doesn’t rule out the possibility of selling this custom Hummer EV garage as an NFT, saying for the same media outlet that it’s just now that we’re starting to see the value of digital art. “CGI is one of the greatest tools for designing and can be more sustainable in many different ways,” she adds. No word if she’d be willing to design one for real life, should the right multi-millionare come asking. 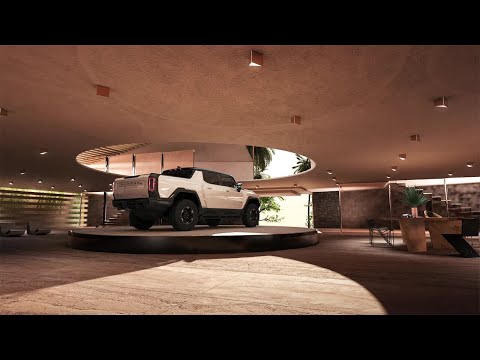