1 The Fast Lane Says 2021 Ford Mustang Mach-E Is Really Good, But Not Perfect

Home > News > Car Profile
Mircea Panait
Named after the Badlands National Park in South Dakota, the most capable Bronco Sport of them all is a very different SUV from the truck-framed Bronco. But as a compact crossover for active and adventure-oriented customers, the Badlands is up there at the top of the segment.
50 photos

Available from $32,820 excluding options as opposed to $26,820 for the entry-level trim, the Badlands left Roman and Tommy Mica genuinely impressed despite a few glaring drawbacks. For example, Ford couldn’t make a case for a low range, not even if you’re willing to pay extra for it.

Fitted with 235-width tires from Falken, the Badlands in the following video also features a full-size spare wheel in the guise of a 225-width Pirelli Scorpion. Another interesting thing about the Bronco Sport in this configuration is the twin-clutch rear drive unit, which uses similar torque-vectoring technology as the Ford Focus RS, but it’s tuned for off-road use.

Optioned to the tune of $35,840 out of the dealership’s door, the Bronco Sport checked out by The Fast Lane leaves much to be desired in terms of interior materials. Hard-wearing plastic is an understandable choice in a vehicle that’s supposed to be rugged, but the cheap-looking plastic steering wheel is compared by Roman to what the Blue Oval offers in the F-150 XL.

Headroom is great, rear legroom not so much, but TFL hasn’t found a single deal-breaking point about the Bronco Sport for the time being. When you think about it, the Compass Trailhawk isn’t perfect either, but the main rival of the Badlands will surely give it a run for its money off the beaten path.

Doug DeMuro has also reviewed the Badlands, describing it as “a very compelling vehicle” with “an unbelievable number of interesting quirks and cool innovations.” This kind of wording speaks volumes about the range-topping trim level, which happens to be the only Bronco Sport that comes with the 2.0-liter EcoBoost four-cylinder turbo at the time of writing.

Along with lesser trims, the Outer Banks that slots right under the Badlands features a three-pot engine that may feel underwhelming on the highway. 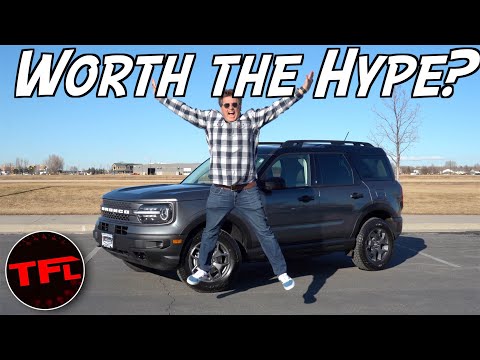