Home > News > Car Profile
Mircea Panait
Somewhat curious for The Fast Lane Truck, this comparison between the Ford F-150 Raptor and Ram 2500 HD Power Wagon doesn’t include actual driving footage. A bit of a missed opportunity, but still, this video focuses on each truck's strengths and weaknesses from Andre’s perspective.
15 photos

In the light-duty corner, the F-150 Raptor stickers for $77,000 or $10,000 more than the heavy-duty contender. The Ram Power Wagon offers two more cylinders and 2.9 liters of additional displacement, and truth be told, the 392-cu in (6.4-liter) HEMI sounds a lot nicer than the EcoBoost V6 powerplant.

410 ponies and 429 pound-feet (581 Nm) of torque is more than adequate for the Power Wagon, but the Blue Oval has the upper hands thanks to forced induction. In the real world, however, Andre says that fuel economy is pretty similar between these two pickups despite their glaring differences.

Both trucks feature reinforced frames, but the F-150 Raptor has a clear advantage in terms of suspension thanks to Live Valve Fox 3.0-inch shock absorbers. The 35-inch rubber shoes are seriously good as well, and they’re superior to the 33-inch Goodyears that come stock on the Power Wagon.

Pretty unique for a heavy-duty truck, Ram has made a case for coil springs for the solid rear axle. This setup will be mirrored by the all-new Raptor, and, going forward, the F-150 Electric will switch to independent suspension for both ends. The Power Wagon also happens to be more of a rock crawler rather than a desert-running weekend warrior, thanks to proper lockers.

Since it’s a premium-equipped Power Wagon, the Ram features a larger infotainment system. The interface is let down by a low-resolution backup camera, but on the other hand, there’s a button to disconnect the sway bar right next to the transmission’s rotary shifter.

“On paper and in real life,” you can expect more flex from the Power Wagon thanks to the solid axle up front. Six-person seating is something the Ford Motor Company doesn’t offer in the F-150 Raptor, and better still, Ram is much obliged to sell you a 12,000-pound (5,443 kilograms) Warn winch. 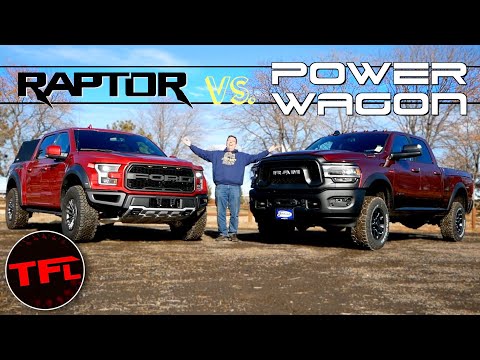