Mircea Panait
Revealed in July as a 2021 model, the first-ever Durango Hellcat also happens to be the most powerful three-row SUV out there. No fewer than 710 horsepower are available from 6.2 liters of displacement, and yes, Dodge says it can also tow stuff to the tune of 8,700 pounds.
60 photos

Excluding freight and optional extras, you’re looking at $62,995 for this family-hauling bad boy. Despite the sheer weight and the aerodynamic qualities of this body style, the Hellcat-engined Durango also happens to be quite a fast son of a gun in a straight line. 60 mph takes 3.5 seconds, and Dodge also claims it can clear the 1/4-mile in 11.5 seconds.

The question is, can the thundering Durango Hellcat teach the Tesla Model Y Performance a thing or two over 440 yards? The Fast Lane is much obliged to answer that, but as it happens, this is far from a perfect drag race because the electric crossover is equipped with a set of snow tires.

Softer rubber, dry tarmac, and about a mile above sea level puts the Tesla at a clear advantage, and as expected, the Model Y has the legs on the Durango Hellcat even though the Dodge got off the line better. We’re also told “the transmission is a little bit on the slow side,” which is to be expected from the ZF 8HP that Fiat Chrysler Automobiles calls TorqueFlite 8.

TFL doesn’t mention the elapsed times, but at the end of the day, the choice between HEMI rumble and e-motor noises is pretty simple. What’s not as simple is the choice between two particularly terrible vehicles in terms of build quality, and there are many horror stories on both sides.

For example, the Durango was recalled earlier this year for pinion gears that were insufficiently hardened, leading to the gear teeth wearing down and resulting in the loss of the park function when stationary. The Model Y, on the other hand, doesn’t even feature an airtight windshield. 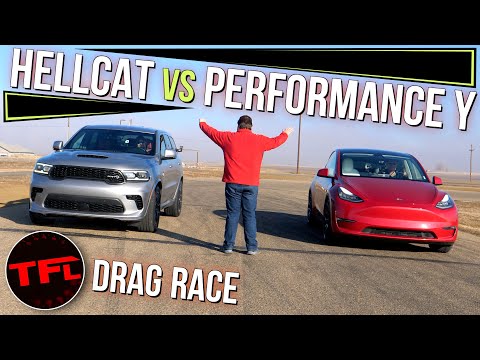