Home > News > Car Profile
Mihnea Radu
Model S vs. Aventador - two cars that are designed for completely different jobs yet have become bitter rivals. This latest drag race is only the latest of several and was put together by Carwow using the chrome-wrapped Aventador S of celebrity car wrapper Yiannimize.
3 photos

Unlike most Carwow videos, this one is all about the entertainment factor, and this revolves around the launch capabilities. Yiannimize starts things off by being unhappy with the launch of his lovely supercar.

But at the same time, Tesla refused to b turned back on. Have you ever seen a car say it's "off"? And then they start joking about the Aventador having an Audi key fob, and thus being mere reliable than it should be.

Eventually, the gremlins stop and they have the obligatory rolling race, which doesn't feature the classic setup. Yianni asks for his car to be in 2nd gear, not 3rd, while Mat counters with a starting speed of 30mph. This turns out to be a small victory for Tesla, but most people only care about the drag race.

This is by no means the first time that these two cars have raced. It's worth pointing out that the twin-motor P100D has 680 ludicrous horsepower while the V12 in the Aventador S makes 740 HP. It's also a lot lighter, but the response times of the engine are a lot different.

Finally, we have to look at the brake test. In Carwow's last drag race Yianni was impressed with how well the P100D stopped, but it still doesn't have a chance against the much lighter Lamborghini.

As we said, these two have been at it for some years. Tesla CEO Elon Musk even twitted once about his car being faster than a "$500,000 supercar." Of course, the venue was a hot drag strip where the Model S had better traction off the line. 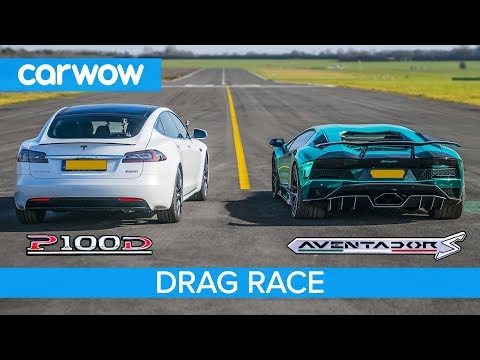