1 The Barnacle Is a Car Clamp for Your Windshield

4 Movie-like Escape from Dangling SUV Is an Excitement Overdose

5 Concrete Proof that Not Everyone Possesses All the Necessary Parking Skills
Car video reviews:
Up Next

In parking lots all across the world, you'll come across people who leave their cars resting over two bays. Well, most of them are simply jerks, but others might be jerks who love their cars way too much.
5 photos

British YouTuber Yiannimize seems to fall into the latter category - or at least he does when he drives his Range Rover Urban which he got wrapped in what only can be described as a mirror substitute. Personal taste aside, he went to the parking lot of a local supermarket determined to try out a social experiment.

He parked his car straight over the line that separates two parking spaces and asked the people passing by what they made of the way he left the RR. You would expect complete outrage from all those people who had bothered to keep their vehicles between the lines, but you would be surprised.

Almost everybody said he did a pretty crappy job, but surprisingly enough, most of them seemed to agree that, given the circumstances, it's understandable and completely forgivable. Yianni explained that he does it so he can protect his car from the other drivers who open their doors without any consideration for the car next to them, and most of those who stopped to talk to him agreed it was acceptable.

Before anything else, we must make one thing clear: parking bays in the UK are freakishly tiny. The average size is 4.8 meters in length (15.74 feet) and 2.4 meters (7.54 feet) in width, which would make it impossible for somebody driving a two-door coupe to get out of their car if there is a large SUV next to them.

However, not everybody thought this was right. A few felt it was inconsiderate and protecting your car from a dent shouldn't be an excuse for the lack of respect for others demonstrated by this type of behavior.

There was even an elderly lady who, when she's not saving stray cats, is probably spending all her time on the Internet staying up to date with the polite insults you can use. Asked whether she knows why he parked the way he did, she replied: "Yeah, 'cause you're sad and you got no life." Cue "Thug Life" music and props.

Undoubtedly, the UK has to do something about the size of its parking bays and acknowledge the fact that they are no longer adequate due to the growing size of modern cars. But until the authorities do something about it, you're still a jerk if you park on two spaces deliberately.

Sorry, Yianni, but you are. And it's not about us being envious or anything, it's about you lacking common sense and trying to make excuses for it. You say "people don't care," so what's your solution? Show them you don't care either by taking up two spaces. The simple fact a lot of people agree with you does not make it alright.

What's your take on the situation? 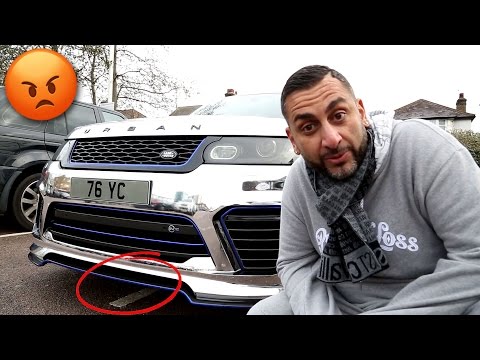