3 Supercharged Mustang GT 5.0 Takes on a Tuned Camaro SS, One Gets Utterly Beaten

Unless your pickup truck is sitting on tremendous power resources, there’s no sense in pitting what is basically a workhorse against a sports sedan unless you want to watch the former get dismantled. Thankfully, this Roush-tuned Ford F-150 employs a large supercharger and, on paper, should be about as quick to 60 mph as the Cadillac ATS-V.
6 photos

There’s obviously a massive weight difference here, and it’s all in favor of the American sports sedan, which by the way, is no longer in production. In any case, the Cadillac ATS-V remains a very fast car, and it’s all thanks to a twin-turbocharged 3.6-liter V6 engine sending 464 hp (470 PS) and 445 lb-ft (603 Nm) of torque to the rear wheels via either a six-speed manual or an eight-speed automatic.

Let’s assume this car was an automatic (0-60 in 3.7 seconds), otherwise, the uploader would have probably mentioned the stick shift, as he usually does.

We also want to say that the ATS-V, and the ATS in general, really doesn’t get enough credit. The nameplate is a former North American Car of the Year winner, and the ATS-V model has managed to defeat various German rivals on multiple occasions during official reviews, so it’s definitely not to be taken lightly.

The question here is whether it’s got enough juice to storm past the much more powerful Roush F-150 truck. This was a classic weight/aero versus raw power fight, with both runs proving very entertaining and perhaps even a bit surprising in terms of how things unfolded. 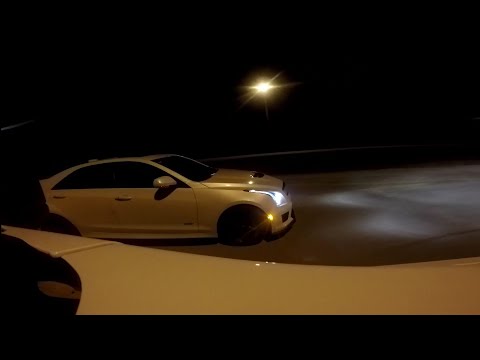