One of the biggest advantages the 2021 Ford Bronco has over its predecessors (aside from the modern technology) is that owners can enjoy a 4-Door life. But where there’s a will, there’s always a way for delivering lustful classic Bronco design wrapped around something that’s modern, supercharged, and 540-hp capable.
27 photos

We have become used to seeing very interesting appearances from the Ford Era YouTube channel’s What The Truck? series, most of them centered on particularly exotic Blue Oval appearances. Sure, some of them also feature the occasional LS or even a COE Ram Heavy Duty Cummins diesel engine swap... but we digress.

Just about anyone interested in playing with classic FoMoCo toys understands that many builders tend to go down the traditional Big Block Ford or Coyote route. But every now and then, a chance to get awestruck arises. On this occasion, it comes courtesy of a three-men little shop in Upton, Wyoming called Sweet Brothers Restomods.

Seeing this 1979 Ford Bronco directly from the front won’t raise any eyebrows—though perhaps diehard connoisseurs will notice the extended fender flares. But once you slightly change the angle, all sorts of mixed feelings will arise. And those can range from dropped jaws to bewildered looks and memory bank searches to confirm Ford indeed hasn’t created a 4-Door Bronco during the previous five generations.

Yet, this 1979 example presents itself with that exact door count. The secrets are plentiful, though. For starters, the shop took the chrome-laden Bronco and ditched the chassis in favor of a modern one coming from a 2011 SVT Raptor F-150 that was massaged by Roush. Naturally, they also kept the supercharged Stage 1 mill that’s capable of thundering around town with all the might of its 540-horsepower stable.

One can check it out from the 7:55 mark before we embark alongside Solomon Lunger for the ride-along; mind you, we’re actually not done with sharing the secrets just yet. That is because the ‘79 Bronco not only matches the Raptor’s width but also the wheelbase since the shop actually chopped the SUV in half and stretched all four doors by some four inches (10 cm) to fit its new life scenario better.

As for the interior, it’s basically lifted directly from the 2011 Roush SVT Raptor with all the bells and whistles, from the keypad door access to the leather-clad cockpit and right down to the rear backup camera. Also, all of the F-150's towing and hauling capacities are also present, just for good measure. 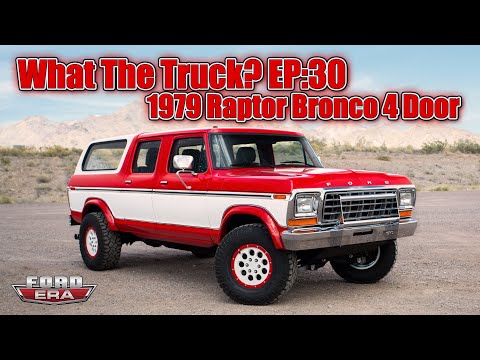