4 Want to Drift the Model S Plaid? All You Need to Do Is Give It a Good Rinse Before

Sim Drifter Gets Behind the Wheel of a 900-HP Nissan S15, Can He Handle It?

About a decade ago, I met a kid who had been practicing his drifting skills by playing video games. After a few years of intense virtual training, he went on to apply them in real life. He was still in Junior High at the time, but it didn't take long for him to become competitive in the sport. So I guess you can say that racing sims can improve your driving skills in the way of speaking.
13 photos

About two years ago, the whole world went into lockdown due to the ongoing pandemic. Sporting events were postponed or even canceled. People needed a way to avoid getting bored to death while being at home, and most turned to video games. Thus, we've seen a tremendous development of e-sports. We've seen the development of new online racing series focused on multiple games and multiple types of racing.

And in 2021, the European Drift Masters Grand Prix series announced that they would be hosting the Drift Masters Virtual Championship. And they were pretty serious about their plans, as they proposed a calendar composed of 5 rounds. A total of 96 drivers signed up for the whole thing, some of them being real-life professional drifters. The series promised €2,000 ($2,266) in cash for the top three drivers at each round.

And more so, the series champion was promised the chance to get behind the wheel of Piotr Wiecek's 900-horsepower Nissan S15. You might have heard that name before, as he's competed in multiple top-level European events as well as Formula Drift in the United States of America. And the S15 is the same car that he used to win the 2021 Drift Masters Grand Prix series.

While I'm sure some people will think of the idea of a virtual drift series and laugh at it, they might reconsider after looking at some of the facts. The rulebook for the series is some 40 pages long, and it accurately describes everything you can imagine, from tandem runs to car specs. Also, the judges for the virtual series were the same ones in the real-life championship! The DMVC even has an official technical staff member!

As you would expect from a drifting series, only RWD cars were allowed to enter the competition. The steering angle was limited to 72 degrees of lock to make things as realistic as possible. Engine modifications were allowed as long as they weren't unrealistic or included any type of KERS. There are rules for this series that aren't even implemented in some of the lower level drift series around the world, i.e., the correlation between the car's weight and its tire width.

The winner of the 2021 DMVC series is Rhys Tatterson, and he has traveled to Poland to receive his prize. At Tor Jastrzab, about 74 miles (120 km) away from the capital city of Warsaw, he met up with Piotr Wiecek for his dream challenge. Now, even though it was highly likely for him to be able to get the car sideways, there were still some aspects left unclear. A real-life drift car comes with some serious G-forces and a whole lot of smoke.

To make things even more challenging, Rhys is accustomed to RHD cars, and Piotr's Nissan S15 is an LHD vehicle. As soon as he gets behind the wheel, he's visibly excited. He starts with a series of donuts then moves on to more serious things. After getting some tips from Piotr, he gets the car all for himself and handles it almost like a pro. In an unexpected turn of events, he even gets the chance to do a tandem run with the European champion himself. 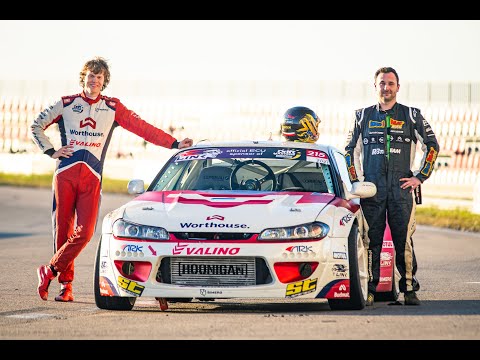