I have noticed that kids these days aren't as interested in cars and motorsports as others before them. Those who are fortunate enough to get a brand new sports car or supercar when they turn 18 aren't necessarily into them for the same reasons as petrol heads. But once in a while, these cars get to serve the purpose that they were built for.
14 photos

That being said, I'm not going to be disappointed if a GT-R owner would tell me that he's mainly using the car for drag racing. I can get that. The R35 can be quite fast down the quarter-mile (402 meters), and it can also provide a comfortable drive to and from the strip. But with drag racing, it's crucial to improve every single aspect of a vehicle to shave off as many seconds as possible.

So even if you add more power, not working on making the car lighter seems rather silly. Sure, that kind of compromise isn't ideal for competing in time attack events either. But at least in that situation, the driver's skills come first. As with any other brand new car, you can always improve some things on a stock Nissan GT-R. It's still a very capable machine when going around corners, but it isn't considered a tuner car for no reason.

And this 2017 California-owned R35 is looking for a new home, as seen on Doug DeMuro's Cars&Bids auction website. There are several interesting upgrades here, and we'll start by mentioning the RDE800 Turbochargers. According to RDE Engineering, a GT-R that's fitted with these turbos should be capable of producing 850 whp when running on E85. On pump gas, you can expect about 700 whp on a stock motor.

This GT-R also runs two Walbro 300 LPH fuel pumps and 1,300cc Injector Dynamics injectors, alongside colder spark plugs, a CSF radiator, and a COBB Tuning cold-air intake system. A dyno sheet has not been provided by the seller, but it's safe to say that this car should be much faster than a standard GT-R. There's a long list of chassis upgrades as well, just as you would expect from a car that's been used for track duty.

Visually speaking, the owner hasn't gone overboard with upgrades, and the green wrap looks perfect in conjunction with the APR Performance aero kit. Opening the door, you'll be greeted by a pair of Sparco Pro 2000 front seats and an RPM rollbar, which are essential to a car such as this. All in all, the seller states that he has spent about $70,000 on the modifications alone.

Reportedly, this GT-R should be capable of doing a fast lap at Laguna Seca in 1 minute and 38 seconds. That's the same kind of performance Randy Pobst managed behind the wheel of a Ferrari F12 Berlinetta. But Randy also recorded a 1:35.51 lap in a Nismo R35 a while ago, so at the end of the day, the driver will make the difference. This car has only been driven for 15,600 miles (25,105 km), and with four days left until the auction is over, the highest bid stands at $58,500. 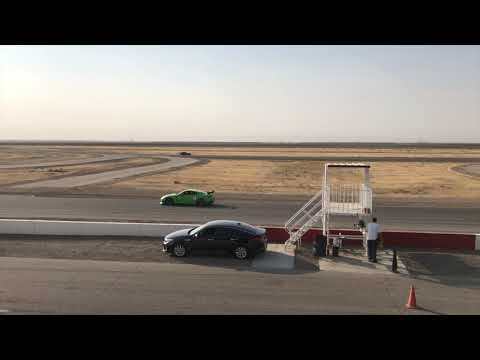