Nissan introduced the sixth generation of the Altima in 2019, and four years later, it introduced a well-deserved facelift for it.

The 2023 Altima was vastly improved not only on the outside but also on the trim level specifications and safety features. Thus, customers could choose from up to eight versions of the midsize sedan. Previously, the Altima was available in five trim levels. Still, the carmaker reduced that number to four and re-arranged the standard amenities.

Obviously, the most noticeable change on the Altima was the front fascia. Nissan dropped the chromed V-shaped trim from the front and left only a "black chrome" grille to support the round, chromed badge. Moreover, the side clusters were larger, offering a more aggressive stance for the vehicle. On the other hand, the headlights were LEDs as standard, which made the foglights obsolete and deleted them.

Inside, the cabin featured new amenities, such as the optional 12.3" touch-screen that resembled the one installed on the Altima's bigger sibling, the Armada. At the bottom of the center stack, Nissan offered a wireless charger, USB-C, USB, and charger ports. On the safety segment, the carmaker included the ProPilot Assist for the 2.5 SL and the 2.0 SR VC Turbo trim levels.

Under the hood, the carmaker kept the same powerplants mated to the sluggish Nissan Xtronic (CVT) gearbox that sent the power to the front or all corners of the car. 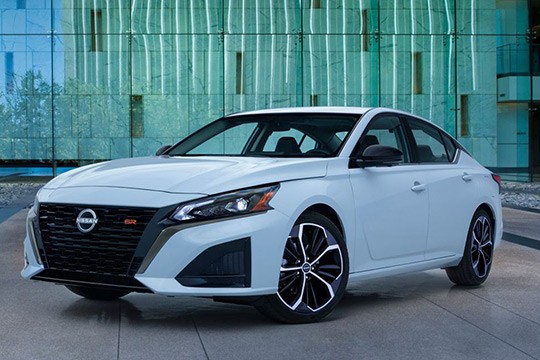