3 Diesel Seat Ibiza Drag Racing Is a Sight to See... Once the Smoke Clears

5 Here's Why the SEAT Ibiza Is Not as Good as the VW Polo
Car video reviews:
Coverstory

Travel restrictions got you down and you can’t visit your favorite Ibiza nightclub off the coast of Spain? Carmaker SEAT has come up with a clever little solution, even though it’s just a one-off concept and not something you’ll be able to buy from them.
15 photos

Meet the world’s smallest Ibiza nightclub, built inside one of SEAT’s Ibiza hatchbacks, which now features a wide range of bespoke upgrades such as integrated DJ mixing decks, strobe lighting and even a bespoke mocktail bar (meaning non-alcoholic).

Its opening performance took place at Brighton Beach in the UK with DJ and TV reality star Woody Cook on hand, tasked with creating a genuine nightclub party atmosphere.

In order to do that, Cook used this mobile nightclub’s full DJ setup, with mixing decks powered by one of the vehicle’s USB-C ports and connected to the 9.2-inch infotainment system via a smartphone. The sound was played through a 300-watt, seven-speaker Beats Audio system.

Meanwhile, the strobe lights and LED lights were designed to complement the car’s existing interior ambient lighting. The new Ibiza features LED lighting around the air vents, illuminating in a color that’s bespoke to each trim level. As for the mocktail bar, it was built using the car’s 355-liter (12.5 cu.ft) trunk, housing an array of bar equipment as well as drinks.

“It may not be the largest crowd I’ve ever seen, but the ability to DJ in any location at any time means the possibilities are endless! From Brighton Beach to the Scottish Highlands, the only limiting factor is your imagination,” said Cook. “Having a car is one of the most liberating experiences to begin with and having it kitted with such an awesome setup brings the musical experience to that same level of freedom and expression. Ibiza has never been so portable,” he added.

The SEAT Ibiza nightclub is easily the smallest and most mobile nightclub ever created, but that red carpet walkway might be a little too much. 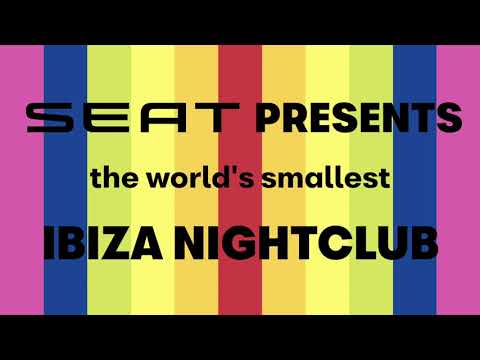