The Spanish brand SEAT introduced the compact SUV Ateca in 2015 at the Geneva Motor Show as a sibling for the Volkswagen Tiguan, but with a sportier look.

The mid-life refresh for the Ateca brought new safety features and cleaner, Euro 6d, engines in the lineup. To emphasize those, the Spanish brand prepared a modified exterior look as well. Some elements were mandatory due to the 2021 European regulations.

The SEAT Ateca was based on the MQB platform, like most of the Volkswagen Group vehicles. On the front, the designers installed a new, wider, hexagonal grille with a 3D design. For the headlights, they prepared a daytime running light pattern with LED that followed the headlamps contour. The slim taillights made the car look taller than it was.

The interior went through a significant revamp and, depending on the trim level. It was fitted as standard with a 10.25” digital instrument cluster. An additional 8.25” or 9.2” touch-screen display for the infotainment unit, depending on the trim level or options, completed the digital instrumentation of the interior. The SEAT Ateca integrated some of the most advanced driver assistance systems available, including Predictive Adaptive Cruise Control, Side and Exit Assist, and Front Assist with Pre-Crash braking. These technologies made the compact SUV safer.

Under the hood, the Ateca was fitted with a choice of diesel and gasoline turbocharged engines. While the base model featured a front-wheel-drive configuration with just 110 hp, the top of the range 190 hp 2.0-liter unit was fitted as standard with an all-wheel-drive system. Depending on the engine choice, a 6-speed manual or a 7-speed automatic (DSG – dual-clutch) were fitted as standard. 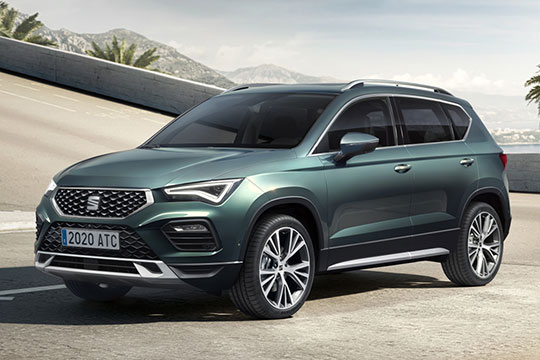