Volkswagen tried to see if it can create a mix between an SUV and a minivan, but it didn't want to do that under its badge. So, it turned toward one of its brands, the Spanish SEAT, which built the car. It was based on the same platform as the MPV Altea XL, which featured a long wheel drive. But then, it had some other tricks in its sleeves.

Maybe the exterior design was not the strongest point of the Alteea Freetrack, but it sure impressed with its black plastic bumpers wrapped-around the bodywork. Moreover, SEAT decided to extend the plastic moldings over the wheel arches both front and rear. Suddenly, the black elements didn't look cheap anymore. They looked to be there with a purpose. The tall MPV with its rounded lines over the bodywork and the silver plastic underbody protection looked like the car could conquer real off-road tracks. Starting with the facelifted version, the Alteea Freetrack featured cornering fog lights.

Inside, due to the higher seating position, all the passengers had plenty of room. While the interior materials were not a top priority for the SEAT, there were more hard plastic surfaces than most of the VW Group cars. But that was not an issue as long as the car offered attractive standard amenities such as the air-conditioning, buttons on the steering wheel, and a good sound system, which could have been enhanced with a DVD-player for the rear seat passengers.

Under the hood, SEAT offered the Altea Freetrack a choice of five engines, and most of them were fitted with all-wheel-drive systems. An automatic (dual-clutch) gearbox was on the options list. 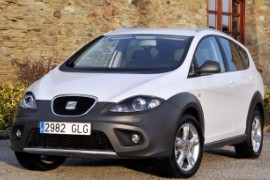