1 Lamborghini Opens Showrooms Like They're Donut Shops, This Is Their 179th Worldwide

Lamborghini is bracing itself for huge Ferrari Purosangue adversity by popping up new showrooms as if they are donut shops, but it also needs to beware of other potential rivals. Luckily, aftermarket outlets also know how to entertain the hype.
39 photos

Ferrari still has not revealed the V12-powered Purosangue super-SUV. But Lamborghini and its Urus fans cannot sigh in relief because Land Rover just unveiled the all-new 2023 Range Rover Sport flaunting twin-turbo BMW V8 muscle, as well as tons of features that even its premier sibling does not have. Instead, it needs all the help it can get to make sure it will continue to shine like a star and stand out in any crowd.

Both the right and the wrong ones, according to affluent aftermarket outlets. Los Angeles, California-based Platinum Motorsport Group prides itself on being a razor-sharp leader in the customization area for the past two decades and we are going to let you be the judge of their latest Urus creation. This monster build features the Italian high-performance luxury SUV freshly dressed up in full Vorsteiner-developed widebody attire.

The aerodynamic kit gets “tons of exposed carbon fiber” to properly contrast the light gray body and, naturally, the Vorsteiner garments fit like a glove. They do so on a lowered suspension and properly contrasting-black 24-inch AG Luxury AGL67 three-piece concave wheels qualified as “very aggressive” by the outlet’s description. Well, the entire build takes the razor-sharp Urus design to a massive extreme, and the rowdy styling is accompanied by an equally raw soundtrack provided by the blue-tinted Carbon fiber-tipped full titanium Ryft exhaust system.

While the new Ryft setup is said to enhance the stock performance and also drop a few pounds because of the extremely light build, there are no actual hp and torque specifications to discuss. Alas, maybe this whip does not even need too many added ponies and just a quick look at its aggressive demeanor will be enough to warrant quick and safe passage among shocked onlookers… 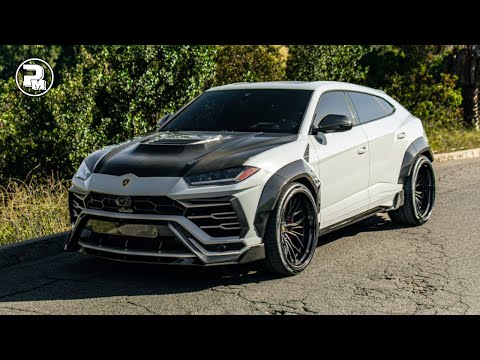