1 This Is the Most Exciting Electric Vehicle Ever bar None – Period!

3 1,914-HP Rimac Nevera Is Done With Winter Testing, Customer Deliveries Up Next

” Way too much traction control.” This phrase might sound out of place when talking about a hypercar you do not want to lose control of. However, the person uttering those words is prevalent on social media, and his high-speed driving style made him famous worldwide. The car is also somewhat different – it can show its taillights to a full-throttle Tesla S Plaid while casually pulling away. The perfect recipe for fun.

Finnish Formula One Former Racer and 2016 World Champion Nico Rosberg just received his own Rimac Nevera. Naturally, when one gets his hands on a car he’s been waiting for for a year, one takes it for a ride. Rimac’s CEO joined in to give a detailed insight on the automobile. The racer-turned-influencer Rosberg video documented the event (watch it below).

It is hardly a surprise to anyone that Nico Rosberg is tough to impress with a fast car. But this time, a short and casual law-abiding afternoon drive in the hills of Croatia made him sparkle with joy. Behind the wheel of his out-of-the-box Rimac Nevera and accompanied by Mate Rimac, the automotive Golden Boy that built the insane car. (“Insane” is the term used several times by Nico himself, so we only found it appropriate to take his word for granted.)

Few customers can enjoy the thrills of getting their car straight out of the factory, but the well-known vlogger Rosberg got just this special treat. Still, his excitement was quickly tempered by the first challenge he had to overcome. Driving through the narrow array of all the cars Rimac has worked on in various projects is not as easy as it may seem. Luckily, the vehicle has enough cameras to see the hypercar out unscathed.

The four-motor Nevera just sticks to the ground “like a proper racer car” (Mr. Rosberg’s assessment. Again, take that precisely as he puts it). The ballistic missile hyper sportscar feels like a regular daily driver in the hands of the World Champion. And it’s not because the car would be anything less than fantastic to drive. It can perform just as well on the streets of a small town - in Cruise Mode -  as it can thrash the tarmac of a racetrack in no time. To accomplish that, it actually has a specific Track Mode along with Sport Mode and Drift Mode for added extra fun.

The Batmobile-customised Nevera 001/150, which Nico Rosberg received a few days ago, is the first one off the production line to be sold. Just 150 machines will be built, and car no #000 will remain with Rimac. According to the carmaker's boss, all models with Rimac-built parts in them will be displayed in the Croatian car brand's museum. Nico Rosberg’s ride is the first customer drive of a Rimac Nevera ever, as Rimac's CEO Mate Rimac points out.

The engineering marvel that Rimac pulled off with this machine is only the confirmation of its mastermind’s almost surreal ascend. From building a prototype in his garage to making the most powerful street-legal production car on the planet (for now), it took Rimac just a decade. Not too bad for a 34-year-old. Being the quintessential gear head, Mr. Rimac took a side job with another car company and now manages the fate of the legendary perpetual record-setter Bugatti as well.

And, to make it even more out-of-this-world, Mate Rimac made it to the very top of the automotive universe with absolute zero formal knowledge on car making. His previous occupation was attending high-school classes in his home country, Croatia. Not too bad, I would agree.

Stay tuned for more from Rosberg's Nevera, as the teaser at the end of the video points toward a more hands-on track-oriented review coming up. 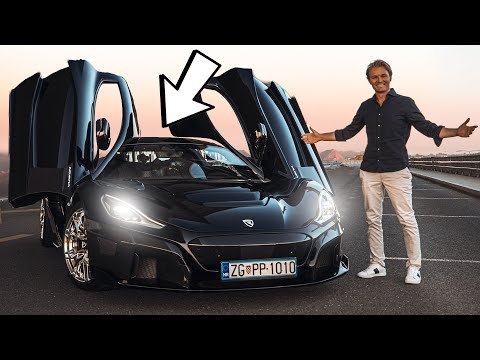