Rimac Nevera was the fastest accelerating hypercar globally when it was introduced in 2020, and the production was limited to 150 units.

When Mate Rimac started his company in a garage in Croatia in 2009, he didn't know that he would become the manufacturer of the fastest production car in the world.

Rimac created the Nevera following the same design language as other hypercars like it was supposed to have an internal combustion engine. But the Croatian carmaker had to do it like that so its customers would recognize the shape of a high-performance vehicle. Its narrow front end and vents on the lower bumper left the impression that it needed those to cool the engine. Instead, it was built to enhance aerodynamics and cool the battery pack. The raked, curved windshield and the sloped roofline followed the same aerodynamic principles of any other supercar on the market at that time. A particular addition was the "cravat" (necktie) design trim placed in front of the rear wheels that sported the colors of the country where the vehicle was sold.

The cabin was handcrafted using the highest quality materials available. Everything was developed in-house, and that led to an exclusive interior. The seats were divided by a wide and tall center console that hosted part of the battery pack. Even the infotainment system placed at the bottom of the center stack was also built by the Croatian company. Its monitor was accompanied by a secondary touch-screen installed in front of the side passenger. At the same time, the driver used a TFT display inside the instrument cluster.

Power went in all corners thanks to a four-motor layout and produced a total of 1,914 PS (1,888 hp), paired to a two-speed automatic gearbox, which enabled the hypercar to exceed the performances of a Bugatti Veyron. 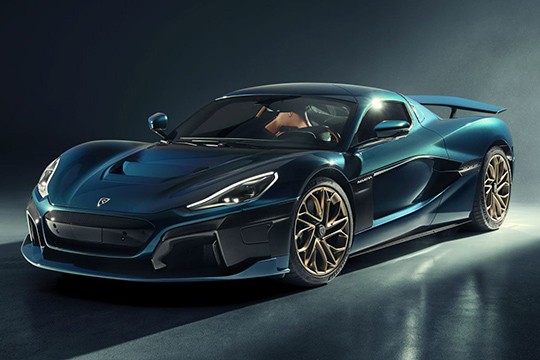 1 1,887-HP Rimac Nevera Reviewed in the Snow, You've Been Saying Its Name All Wrong