5 Rimac Nevera vs Ferrari F40 Drag Race Shows How Much Supercars Have Evolved
Car video reviews:
Up Next

Home > News > Car Profile
17 Nov 2021, 21:18 UTC ·
by Stephen Rivers
You read that right. The 1,914-horsepower Rimac Nevera just went off-roading. We're not talking about some gentle dirt road either. This thing ends up muddier than most Jeeps ever will be. Shots fired.
9 photos

Matt Rimac deserves a lot of credit because he's one cheeky dude. He's the first CEO of the new hypercar superpower that is Bugatti Rimac, and now he's showing us how he lets off a little steam.

Interestingly enough, this video isn't just about the Nevera getting all muddy. No, it's actually focused on the fact that Rimac is currently working hard to homologate the car for safety standards around the globe.

To do that, they have to crash-test their cars. They've actually built quite a number of cars that have been going through these tests. In fact, most have been crashed, repaired, and crashed again.

Well, now it's time that the first near production-ready Nevera that we've all seen on various outlets will share that same fate. Matt makes a great point, though. When life gives you lemons, make lemonade. So he's going to take the Nevera so far off-road that it's hard to believe.

The video is perfectly cut together too. It starts out with Rimac and the car he's created blitzing down a dirt road at serious speed. It honestly reminds us of a rally stage situation.

This is the kind of "off-road" most of us likely expected. The road is technically dirt, so it counts, right? Well, that doesn't last long. A quick pause happens with the car stationary.

Matt opens the door only for leaves to pour out from the side sill. We're treated to a hilarious shot of the front air-dam stuffed full of more foliage than you'll find on that wreath soon to be on your front door.

Then the madness actually begins. Dirt flies everywhere as Matt drives this thing all around the future Rimac campus site. Of course, the video ends with him washing off this soon-to-be crashed masterpiece. Here's to hoping this sort of lovely insanity remains a part of the Rimac DNA. 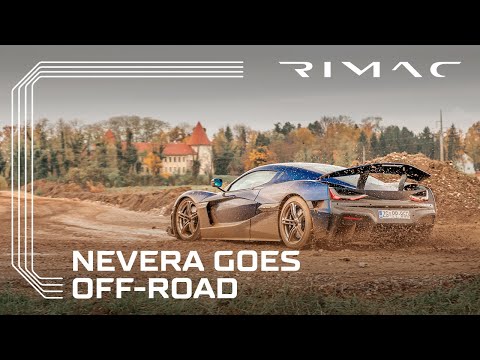