3 Boom Supersonic Unveils New Design for Their 1300 mph Airliner, It's Quiet and Sustainable

5 Dronamics Obtains the License for Its Black Swan, "The Most Fuel-Efficient" Cargo Drone
Car video reviews:
Up Next

The story of Kulula Airways, the South African low-cost operator, is short and sad. It began in 2001 and ended this summer. But, during the 20 years of service, Kulula made a name for themselves for something else than just air travel.

Just look at the pictures. Not exactly the standard livery of commercial aviation, yet unmistakable to the core. After all, Kulula taught us the main parts of an airplane (at least, its own planes, for that matter) in a very illustrious manner. Going from nose to tail, you find a visual map of every aircraft segment that bears a degree of avionic importance (according to Kulula, anyways).

Kulula even accomplished an unprecedented feat in civil aviation: the stealthy passenger jet. No, it wasn't that radar waves bounced off the fuselage. Instead, the Africans had a brilliant idea: a camo-pattern paint job. "No one saw us coming" was the message stamped on the front sides of the plane.

And it's not just the outside that put a smile on passengers' faces. Pre-, mid- and post-flight announcements were just as delicious. The video at the end of this article is just a specimen of what the pre-flight safety briefing was like onboard the lively green planes.

For passengers with "It's complicated" Facebook status, Kulula had perfect wisdom. "There may be 50 ways to leave your lover, but there are only 4 ways out of this airplane."

Their low fares and sharp wits went hand in hand on every possible occasion: "Ladies and gentlemen, we have landed in Cape Town. Please take all your possessions. Anything left behind will be shared equally between staff. Please note we do not accept unwanted mothers-in-law or children." And how about this gem of gratitude after touchdown: "Thank you, and remember, nobody loves you, or your money, more than Kulula Airlines."

But that wasn't their only April's 1st magic. Precisely two years after their sky take-over, they launched a world-first "landing on state-of-the-art water runways" to help increase airport traffic fluidity.

They stopped at nothing to go after their competitors, too. The self-entitled "Most South African Airways" rank was a direct hit at the South African Airways Company. Not amused, the latter went to higher levels. They notified the Advertising Standards Authority, but the verdict was less than ideal for the petitioner party. In late July of 2013, the decision came out - there was no breach of Advertising's Code of Good Practice.

To prove the point about their unquestionable South Africanness, Kulula even offered the lobola for the royal wedding. Yes, THAT royal wedding of William and Kate. The lobola (a ceremonial pre-marital gift made by the groom to the bride's family in traditional native South African weddings) took the shape of a herd of the finest British livestock.

Unsettled in their practical jokes, Kulula devised another innovative business idea. Mid-flight commercial skywriting services were perfectly synced to not be performed during in-flight beverage distribution. "If you have something big to say, what could be better than spraying it across the skyline at 34,000 feet in letters made from giant green clouds?"

During its two-decade commercial run, the company relied on Boeing, McDonnell Douglas, and Airbus to provide the aircraft for operations. In total, 31 airplanes wore the comic liveries of Kulula, 23 being Boeing 737s and 727s.

Unfortunately, the ill-fated global March 2020 lockdown muffled Kulula's laughter too, and their green aircraft were grounded for eighteen months. Brutally hit by the massive landslide in operations, Kulula saw its smile wiped off its planes by financial losses, eventually leading to the company's liquidation.

Despite the financial crash that ended this ironic story, Kulula - which means "It's easy" in Zulu - can still put a smile on anyone's face. Browse the photo gallery and take a close look at some of aviation's best laughs. 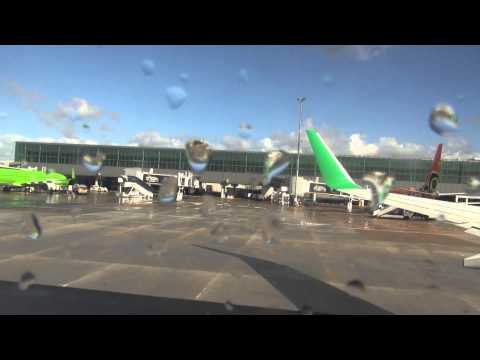