There's a reason why fail compilations have so many views on YouTube: it's because if there's one thing we’re all good at, it's watching others flop and thinking how well we would have done in their situation.

Some people keep these thoughts to themselves, but others are way too keen to let everyone know how smart they are, so they can't resist the urge to share their wisdom with the world by dropping a comment. Anyone who spent more than five minutes on YouTube knows that sometimes the comments section can be more entertaining than the clip itself.

Not when it comes to automotive fails, though. Here, due to the strong brand loyalty, the comments will be split in two: one side that defends the vehicle in question, diverting the blame somewhere else (the driver, the conditions, the tires, or even destiny itself), and another that will gladly take the opportunity to throw some dirt at the vehicle’s maker, not so much because it actually builds bad cars, but because it's in competition with their favorite brand.

Land Rover is probably one of the best examples of a carmaker falling prey to online roasting. There is not one video on the Internet featuring a Land Rover that doesn't have countless comments joking about the vehicles' reliability issues despite the fact things have changed dramatically over the past decade in that regard. However, if enough people keep repeating it, there's very little chance of this trope going away any time soon.

However, even if they do have a reputation for breaking down easily and very often, at least people know Land Rover makes good off-roaders, right? Well, leave it to the Internet to take care of that too.

You may have recently seen a clip of a Range Rover Sport failing to go up a snow-covered street in an undisclosed part of the world, with its title rhetorically asking whether the SUV’s inability to reach its intended destination was the driver’s fault. From the way it’s worded, though, it’s clear the author wanted to make sure the majority of those who read it and watch the video will perceive it as a failure for the vehicle before anything or anyone else.

The clip is actually a prime example of how easily you can slander a carmaker with a little help from the eager keyboard pro-drivers (a little variation on the classic "keyboard warrior"). Knowing a lot of people would point at the tires and say "j'accuse!", the video makes it very clear from the title that the luxury SUV is wearing Michelin Latitude Alpin winter tires - some of the best on the market.

With the tires out of the way, the driver and the SUV are the only culprits left. However, even if the driver was indeed sub-par, a vehicle like the Land Rover Range Rover, with its idiot-proof Terrain Response System, is supposed to navigate an obstacle such as the slope in question with ease. After all, it does have an option that says "snow" (well, it says "grass/gravel/snow", so it's not really *that* straightforward), suggesting that, in theory, the vehicle should be able to sort everything out by itself.

Well, all settings can go out the window if the surface of that street was super-slippery. Snow is one thing, but if it sits on top of ice, that’s a completely different story. And then there's that slushy, half-melted snow that looks like it shouldn't pose too much of a challenge, and yet is much harder to navigate through than fresh snow. We weren't there, so we don't know for a fact what was covering the surface of that street.

As for the driver, the clip does show us two things that could have potentially helped them reach that not-so-distant summit. One is the fact they didn't have the traction control disabled. As far as we know, the feature isn't turned off by default when the "snow" mode is selected, so the driver would have had to do it on purpose even if they did have the right setting on the Terrain Response System engaged.

Finally, they definitely shouldn't have aimed for the already existing tracks in the snow since you're guaranteed to get the slushy stuff there. Instead, they should have gone for the fluffier white snow. Even if that alone doesn't guarantee success, it would have raised the chances a little.

At the end of the day, though, it all boils down to those tires. If they're not winter-spec, as the title claims, then there's no point in dissecting the clip. Even the most extreme off-roading rig wouldn't be able to do any better if the tires couldn't provide the necessary grip. The author knows that, which is why they included the information in the title. In order to lend the failure any credence, they had to remove as many of the variables as possible.

The only problem with that is that we have to take their word for it. Well, as they say, everyone is innocent until proven guilty so, in the absence of any proofs toward the contrary, we were willing to take their word for it. That is until they published this new clip: “SNOW TIRES OR NOT? Range Rover Sport Fails to Climb Snowy Street – The Truth is Revealed!” OK, so we’ll get to see the full length of the footage that also contains a close-up of the wheels, we thought.

We were wrong. Instead, this so-called revealing of the truth only managed to make the whole thing seem a lot murkier than it did initially. It looks as though somebody is trying really hard to make sure the Range Rover (and, to a much lesser degree, its driver) has its reputation damaged by that clip.

The video does indeed show us the tires on the SUV, but it’s a completely separate footage shot on a different day that, for all we know, could have been well after the failed climb that sparked all this. “What about the whole innocent-until-proven-otherwise thing you mentioned earlier?” you might say.

Well, when someone’s actions become shady, that principle is put on hold, and this new clip definitely rang some alarm bells in our heads. Why? Because if you can’t eliminate an uncertainty with rock-solid proof, you’re better off leaving things as they are. Trying to do it with irrelevant data will only cast doubts over your intentions. 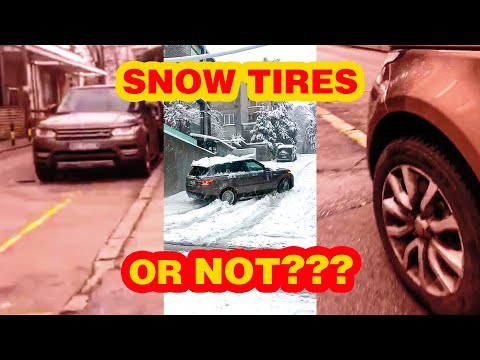