5 Build Your Own Classic Peel P50 Microcar on the Cheap, If You Dare
Car video reviews:
Up Next

The phrase “bigger isn’t always better” might be a cliché, but it is true. For the explorers, the daredevils and the world travelers, it’s not the vehicle that gets them to a destination that matters, but the overall experience.

At least, that’s the idea behind a tiny RV conversion that still claims to be the world’s smallest campervan for two adults, the QuboCamper. As its name implies, this small RV is based on a now-discontinued Fiat Qubo, that tiny MPV (Multi-Purpose Vehicle) launched for customers looking for a compact but not entirely inelegant solution to their transportation woes on narrow city streets.

Many European cities have narrow streets, and this is particularly common in Italy, where this famous QuboCamper was born way back in 2014. The idea for it was not new, and the couple who built it were honest about that, but the approach was of the most pragmatic kind: they needed a vehicle they could sleep and eat in, they needed it to be small enough to maneuver in their home country as a daily, and they needed it to be cheap. They already had a Qubo, so they decided to use it as basis for their future campervan.

The result is less impressive visually, but more so for its functionality. The QuboCamper was completed that same year using cheap materials and then went on an epic journey across Europe, bits of which were documented on social media. Even if “extremely crude,” as they described the build, it proved to be a functional one.

The conversion itself is ingeniously simple: a wooden frame on which sits a three-fold platform that makes the bed. At camp, you simply recline the front seats, and lower the platform and secure it with chords attached to the seat belt. The mattress is already there, folded on itself in the back, so turning the Qubo into a bedroom takes some 30 seconds – and a lot of moving around the car.

Underneath the bed are the kitchen, the storage units, the bathroom and the living room, with the caveat that all these terms are used very loosely in this particular case. On the driver’s side is a pull-out drawer that contains the tiniest-teeniest sink and, right next to it, a small portable cooler. Water is pumped manually from a 20-liter (5.2-gallon) container farther in the back. Pull out the plastic container, and you will see it has a shower head attached to it – and voila, you get a shower with six full minutes of continuous water flow!

The opposite drawer was so famous at the time the QuboCamper went viral that it got its own name: the legendary Cassettavolo (which means “drawer unit” in Italian). It’s 110 cm (3.6 feet) long and has a total payload of 90 kg (198.5 pounds), which means it’s spacious enough to carry a few days’ worth of provisions, as well as all the pots and pans two people would need to cook them. As you can see in the video below, the couple used it mostly for storing pasta and tuna cans – after all, they are Italian. The Cassettavolo also integrated a one-burner stove, so maybe pasta was the most convenient dish to cook, all things considered.

Because this was the kitchen, bathroom and living room, the couple added LED lights to the rear door and, later on their journeys, a tent that expanded the available space and offered much-needed protection from the elements. From what we can see, there was no toilet onboard.

Even though QuboCamper became famous, not many specifics of the build were ever made public. That said, the Qubo MPV came with a choice of 1.3-liter Multijet diesel or 1.4-liter gasoline engine, was famously efficient and surprisingly competent, which the couple confirmed still held true with their conversion.

They traveled in it on their epic journey that same year and promised they would return with the details of the trip, but seemingly never did. The QuboCamper was last active online in 2017, when it was in Norway, so no word on whether it’s around, maybe still roaming rocky roads or the narrow streets of whatever historic European city. We’d like to think it still is, but we’ll let you know when (and if) we hear back from its creators.

Though the Qubo has been discontinued, QuboCamper kits can still be bought online, some for as little as $700. It’s a rudimentary RV alright, but it’s proof that nothing is impossible if you really want it – even if that means traveling the world when you don’t have the right campervan for it. 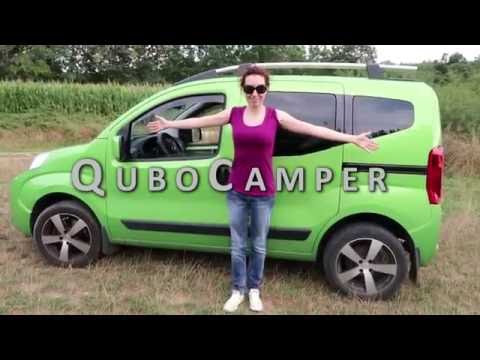