2 Living Vehicle's Mind-Blowing, Off-Grid Luxury Trailer Can Now Produce Its Own Water, Too

4 The Teton Is a Lovely Tiny Home on Wheels, Fit for a Family of Four

5 Doodle House Is a Pet-Friendly Tiny Home That Feels Like a Luxury Hotel on Wheels
Car video reviews:
Coverstory

The tiny house movement has been around for close to two decades, but has only seen an unprecedented boost with the start of the 2020 international health crisis. But how does one make tiny living a bit more affordable?

DIY Tiny Home Costs Under $8,000 to Build, Is Quite Good-Looking

The reality is that, for all the benefits tiny living brings in terms of a reduced impact on the environment, reduced costs of living, and more freedom to move around, it’s still not past its biggest challenge and impediment: the high cost of buying into it. Put it differently, most tiny homes are still priced prohibitively. They’re too expensive, bluntly said.

One way to bypass the high acquisition prices would be to go all DIY and build your own tiny home. That usually implies at least some carpeting skills, if not actual experience in working with wood and construction materials, and a good eye for design. After all, even if you build the tiny on your own and cut expenses, you’re still looking at a hefty bill for materials, so it would be a shame if you made a mess of things.

One YouTuber is out to prove that virtually anyone can build their dream tiny home, even without skill and experience. The only condition is that you get moving and stay motivated throughout the project, even if it doesn’t go according to plan, David Rule says.

In fact, his approach is a bit more radical and, because of it, probably a tad artificially dramatic: you don’t even need a detailed plan of the project. Like many other first-time tiny house enthusiasts, Rule says that he picked up all the information he needed from video tutorials and the occasional thread on dedicated forums. He was never a good (or even a decent) carpenter, he had zero experience and skill, but he was still able to build his dream home – more impressively, he did it on a budget of under $8,000, out on his parents’ driveway.

The entire project was, of course, documented on video, which you can find in full below. It’s ok if you have reservations about Rule’s alleged lack of experience, especially as he seems to go out of his way of emphasize it every chance he gets. It’s his message that counts, and that would be: the fabled “American dream” isn’t being tied down to a 30-year mortgage, working your butt off to make payments; it’s about owning a house despite current circumstances. If you have a towing vehicle, a small budget and the willingness to put in some physical work, you can own a house.

Rule, who describes himself as a photographer whose strong point is “getting lost” and being an “excellent hi-five-er,” started out with a two-axle, 16-foot (4.9-meter) long, 7-foot (2.1-meter) wide used trailer. He made mistakes along the way, with the first one being that he forgot to sand the trailer for rust before he started building on top of it, but he did his best to repair them.

He stripped the trailer bare, added a subfloor and insulation he got on the cheap from a friend. He then started framing the walls and the roof, working by a very simple (and rather childish) sketch. It’s almost as if Rule wanted to demonstrate that even the most clueless builder could build a tiny, and if that’s the case, it’s mission accomplished for him.

After he enforced the wooden frame with plumber’s tape and steel brackets, he sheathed the exterior with cheap, thin plywood, but used a thicker type for the roof. He wrapped the house to seal it, waterproofed the roof, and used seal flashing for the windows and the door, before installing them. Next, he added metal roofing and a skylight, sanded the rust on the trailer, and finished the exterior with wood and metal siding.

Rule only had help on the next stage, which saw him add waterproof paint on the metal and a contrasting, walnut-colored stain on the cedar boards. The friend who helped him also tested the bedroom loft, which he declared comfortable, surprisingly spacious and not claustrophobic.

Rule’s tiny is only 150 square feet (14 square meters) and, as per his own admission, about “as aerodynamic as a potato.” Moreover, only the shell is complete, so he will have to invest more money on the interior. But the bottom line is that he was able to build his own (tiny) home for under $8,000, so he’s living the American dream. He hopes to inspire others to do the same. 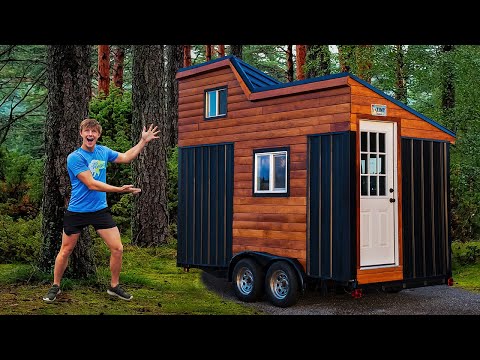