5 The Flying Yacht of the Future Is a 656 Ft Air Balloon With a 197-Ft Vessel Attached to It
Car video reviews:
Space Junk

With its enormous cargo volume, impressive speed, a freakishly extended range, and using 100 percent green and renewable energy, H2 Clipper’s airship has set out to transform the airfreight industry. And it’s constantly working towards achieving that goal, marking milestone after milestone.
8 photos

H2 Clipper is an aerospace and alternative energy company based in Santa Barbara and its patented aircraft design wants to reinvent airships, promising to provide the fastest, most flexible, and efficiently scalable way to transport fuel-grade hydrogen to market worldwide, as stated by CEO Rinaldo Brutoco.

While it still has a long way to go until it can put these big balloons in the sky, H2 Clipper is already making bold claims when it comes to the abilities of its airship, boasting insane specs. For starters, the company says that its aircraft will have up to 10 times more cargo space than any other air freighter, with a cargo area of more than 265,000 cu. ft. (7,500 cubic meters).

So we’ve got a zero-emissions aircraft with massive cargo capacity, massive range, and impressive speed. But there’s more. H2 Clipper claims it can offer all of the above for less than one-quarter of the cost of traditional air freighters.

With such incredible features, H2 Clipper could easily achieve its goal of revolutionizing the air shipping industry, but we’ve still got a few years of waiting ahead of us before we can see that happening. So far, the company has succeeded in having seven patents issued for its airship and it recently announced that it completed a simulated wind tunnel test of its so-called Pipeline-In-The-Sky airship, using computational fluid dynamics (CFD). The test confirmed the airship’s aerodynamic design, with the aircraft achieving an extremely low level of residual drag, as claimed by the H2 Clipper.

The company hopes to complete the construction of a prototype in 2025 and to fly its first full-sized airship in 2028. You can find out more about the aircraft in the video below. 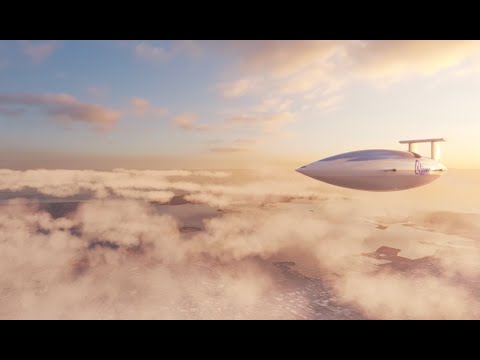