3 Will Smith’s Gigantic $2.5 Million RV The Heat Is Now Used for Unglamorous Glamping

4 Meet the Maly Fahti, the Tiny ‘60s Egg-Shaped Trailer That Could Sleep 6 in Comfort

It’s not about the size of the boat but the motion of the ocean. That saying applies to most things in life, not just that one deed that probably popped in your mind when reading the headline.

Size doesn’t matter – and shouldn’t, especially when there are budgetary constraints and other important aspects that pull focus. In the context of the current boom for tiny living and downsizing, one of the best examples goes all the way back to 1998, when three high school friends and then-recent graduates decided to build their own transformable RV.

As most people (re)discovered the joys of living on the road with the 2020 international health crisis and the restrictions it brought along, we’ve been covering many ingenious, awesome, or just downright weird solutions. Few can hold a candle to this unnamed icon, a Japanese transformable RV that started out as a busted mid-80s Toyota ToyoAce truck.

Call it an RV or call it a tiny house on wheels, but this two-story handmade camper is the stuff of dreams for every young aspiring traveler for whom the desire for adventure overrules considerations of space or ultra-comfort. Then again, the Japanese are famous for their ability to maximize every inch of available space, as evidenced by the tiny yet homey kei campers, which offer generous accommodation and many creature comforts in the most compact footprint imaginable. This transformable RV is perhaps better since, unlike most kei campers, it also offered a bathroom – with a soaking tub in it, no less.

The idea for the RV took shape in 1998 when three friends who had just graduated from high school decided to go on a roadtrip across Japan before what we call today properly “adulting.” It would take them another two years to actually do so since they were neither “carpenters [n]or engineers,” and lacked a generous budget for their build. In other words, actually building their RV took a lot of time and the proverbial sweat and tears through the trial-and-error method.

Considering that they started out with a battered mid-’80s ToyoAce truck, the result was impressive. The final RV was a transformable one, which unfolded a second story when in camp mode via hydraulics: two layers opening up in succession and creating a fully enclosed space. The entire process took only seconds and was done at the touch of a single button in the cabin, as shown in the (low-resolution) video below.

The second story was a Japanese-style bedroom with no furniture but a tatami-matted floor, full-length window, and skylight. It was perfect for sleeping the three friends, with access to it done by means of storage-integrated stairs. The ground floor housed the living and dining area, a fully-stocked kitchen, and the bathroom, which featured a bathtub, as noted above. The kitchen came with a sink, gas range, water heater, and rice cooker and was spacious enough to allow two people working side by side, as long as they didn’t mind bumping elbows every once in a while. A porch also folded out on the side, expanding available space into the outdoor.

The RV was made with plywood over a steel frame, with steel sheets for the boxy exterior. In travel mode, it was only 3 meters (9.8 feet) high and wide enough to fit through even the narrowest streets of Japan. Certain details about the build have been lost in the years since, like tanks capacity, fuel efficiency, or max speed of the rig, but we do know this: in 2001, the three friends completed their cross-country journey after a year on the road. They documented their amazing build and their subsequent trip and even put together a documentary-style movie on a website (archive link).

According to Japanese Nostalgic Car, the tiny transformable RV resurfaced again in 2008, when it was offered for sale for just $5,500. That’s cheap by most of today’s standards, but kei campers are usually priced affordably – and off-limits for many due to lack of international shipping. Whether this one ever found a buyer is unknown, but here’s to hoping it’s still being appreciated, roaming narrow roads in search of adventure. 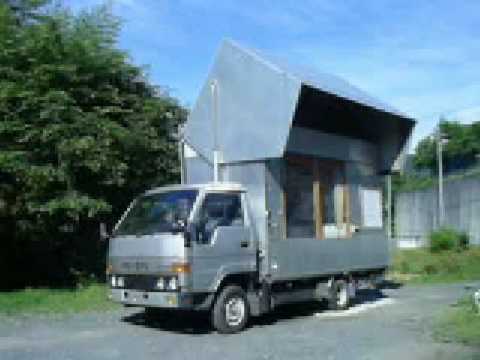