1 Pontiac Fiero Gets Modernized for 2021, Looks Like the Toyota MR-2

2 Lifted Lamborghini Countach Looks Like an LM002, Is Neither

Pontiac Fiero Gets Modernized for 2021, Looks Like the Toyota MR-2

Yesterday, we talked about the original Toyota MR-2, an old mid-engined sports car that has a chance of becoming iconic. But who's to say the same can't happen to the Pontiac Fiero?
3 photos

Nobody takes this car seriously now. "Modernized Pontiac Fiero? They call that a C8 Camaro," is what the trolls are going to say.

General Motors swallowed up so many great car companies and eventually spit them out dead. Just last week, we learned that Australia's Holden, which made the SS possible, will go under soon. Back in 2010, Pontiac was sacrificed to the sales gods.

Over its long history, the brand made several iconic cars that are taken somewhat seriously, like the Firebird, with its sports wedge shape, or the king of the drag strip that is the GTO.

But the Fiero is nothing like, which is not just because of the departures from the Pontiac bigger-is-better convention. It was small, a 2-seater with the engine in the back, so the proportions were "off."

But the YouTube artist known as The Sketch Monkey sees potential in the Fiero and wanted to do a modernized rendering. His usual technique is applied here, which is to clean up all the old lines that date the car.

The black elements surrounding the car are stripped away, while the taillights are slimmed down to an LED strip. Bigger wheels and a diffuser make this modernized Fiero look like it belongs somewhat in the modern era, even though it's an 80s design.

The outcome resembles the classic Toyota MR-2. Speaking of which, it's mentioned at the beginning of the video that the Fiero sold way more numbers than the Japanese mid-ship. But that's because the American market was bigger.

Many Fieros ended up being turned into replicas of Ferraris or covered in tacky body kits. But maybe the history books will eventually show kindness to the GM car that was mid-engined way before the Corvette. 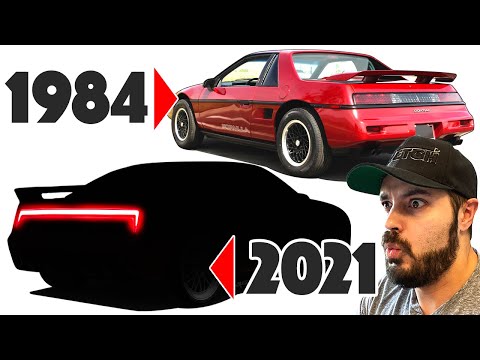