Pontiac raced hard through Bonneville generations and, after just three years since it unveiled the first generation, the carmaker brought the third generation, which lasted only three years.

Made as the top of the line Pontiac in the stable, the Bonneville was already offered in a few body shapes such as coupe, convertible, a sedan with four doors, and station wagon. But it was the coupe that ignited the car-buyers to the Bonneville, which didn't change in three years.

The 1961 model featured a far more different design than the original 1958 model. The space-race theme designs were gone, and so were the flamboyant, curved panels. The 1961 generation featured a cleaner design, with flat panels and long lines. At the front, the designers kept the dual-headlamps system placed horizontally on the grille. A pinned-out center area sported the red Pontiac badge. From its sides, the designers made the sideline with an up kick behind the doors and continued to the end of the rear quarter panels.

Inside, Pontiac installed a bench at the front and one in the rear. Since it was the most exclusive car from its stable, it made it looks exquisite. The vinyl upholstery was completed by the walnut veneer trim from the instrument panel and door panels. On the lower side of the cabin, the carmaker installed carpeted door panels in the same color as the floor mats. The coupe featured air-conditioning, a radio, power steering and brakes, and interior lights. 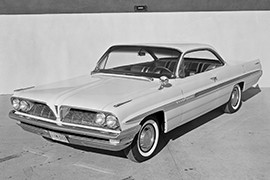