Pontiac introduced an upgraded version of the G6 Sedan in 2008, desperately trying to get more sales and avoid bankruptcy due to the world financial crisis.

During the world financial crisis that started in 2007, carmakers had to scale down their business. They had to choose if they would keep their products on the market or launch new models. The G6 was not too old to replace but needed a facelift. So GM took the daring decision to invest in this sedan and offered it with new features and engines. But it was all in vain. By 2010 the brand was doomed.

Based on the same platform co-developed with Fiat, the G6 sedan sported an all-American styling, with the signature Pontiac dual port honeycomb grille surrounded by a chromed trim. In addition, the same grill pattern was used for the lower air intakes. The headlights received clear blinkers and parking lights fitted with amber lights. Depending on the engine option, there were single or dual exhausts at the back.

The interior, on the other hand, received several upgrades. The lumbar and torso airbag, which was introduced in 2006 for the G6, became a standard feature across the range. A striking difference was on the center stack that hosted a new HVAC control system and a new stereo with an AUX-in port. Additional changes were performed on the trims, which got a satin-metallic finish.

Under the hood, the G6 received the fuel-efficient 2.4-liter inline-four engine paired with a six-speed auto. In addition, a more powerful version of the 3.5-liter V6 was available. 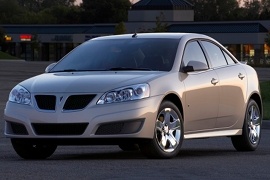 1 The First Pontiac Race Car Ever Built Pops Up for Sale, Costs a Fortune