2 Doug DeMuro Drives Polestar 1, “It’s Unlike Any Volvo You Have Ever Seen Before”

5 This Roborace Polestar 1K Concept Is a Raging Autonomous Machine
Car video reviews:
Up Next

You’ve may have heard “Tesla killer” mentioned in the same sentence with Polestar 2, but the Sino-Swedish company hasn’t delivered a Model 3 rival. For the 2021 model year, the Chinese sedan with Swedish upbringing has been rated at 233 miles (375 kilometers) by the Environmental Protection Agency.
35 photos

First things first, the Palo Alto-based automaker quotes 250 miles for the Standard Range Plus with rear-wheel drive and 322 miles for the Long Range with all-wheel drive. Secondly, Polestar is asking $59,000 before options like the $5,000 performance package and special colors such as Magnesium.

What comes as the biggest disappointment for the five-door fastback sedan with a compact footprint is the 275-mile target that Polestar has highlighted in press materials. The EPA rating is nowhere close to the WLTP rating either (470 kilometers or 292 miles), which goes to show that traditional automakers and newcomers alike will find it hard to catch up to Tesla, Inc.

“What about real-world driving range?” Glad you’ve asked, but don’t expect any surprises there either. YouTube vlogger Bjorn Nyland had the opportunity to test the Polestar 2 at 90 and 120 km/h (56 and 75 mph) a few months ago on public roads, and the most that he could squeeze out of the car was 435 and 305 kilometers (270 and 190 miles). Not bad, but not great either.

On a similarly doleful note, the Environmental Protection Agency has rated the combined energy efficiency at 92 MPGe - including charging losses - while the Tesla Model 3 Long Range with dual-motor AWD is good for 121 miles per gallon equivalent. Over 100 miles, that translates to 37 and 28 kWh.

Don’t forget, however, that we’re talking about the first-ever EV from the performance-oriented Polestar brand. Given time, the go-faster sibling of Volvo Cars is certain to close the gap to Tesla thanks to advancements in battery technology and e-motors. A dedicated EV platform like the SEA developed by Geely would also make a considerable difference. 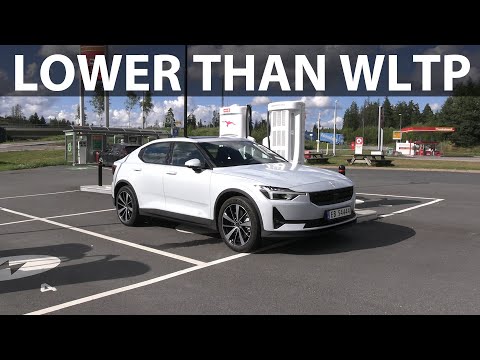