1 Polestar 2 Gets Better Drivetrains and Range for the 2024 Model, U.S. Sales Begin in March

3 Uber Drivers Will Be Able to Rent EVs From Hertz in Europe, 25,000 of Them Available

5 The Power of Android: Users Can Now Unlock Their Car Doors With Voice Commands

Polestar was created as a sporty and luxurious brand for Volvo, which, in turn, was part of the Chinese group Geely.

With a design inspired by the Scandinavian minimalism and the safety of a Volvo, Polestar's third model brought on the market impressed with its simple yet attractive design. In addition, the electric drivetrain and respectable range endangered many other vehicles from the segment. In addition, the automaker focused more on safety. After all, Polestar was part of Volvo cars.

In terms of design, the 3 featured a front fascia fitted with LED daytime running lights resembling the Thor hammer, like those installed on many Volvo cars. Polestar installed a heated slat on the narrow grille that hosted a camera and several sensors for various safety systems such as automatic emergency braking or adaptive cruise control. Above it, Polestar installed a small wing that helped the car obtain a very low drag coefficient. From its profile, the five-door SUV featured an unusual ascending beltline that ended behind the rear doors with a steep angle. Finally, at the back, the vehicle featured a curved tailgate with a roof spoiler on top.

Inside, the automaker installed a minimalist interior with a landscape-oriented instrument panel fronting the driver and a portrait-mode 14.5" touchscreen on the center stack. The bucket seats were wrapped in man-made leather. In addition, Polestar installed radar sensors that could detect small movements, such as the breath of a living being. These sensors were connected to the HVAC unit so it could provide heating and ventilation inside the cabin. Apart from the front seats, the automaker installed a split-folding rear bench. 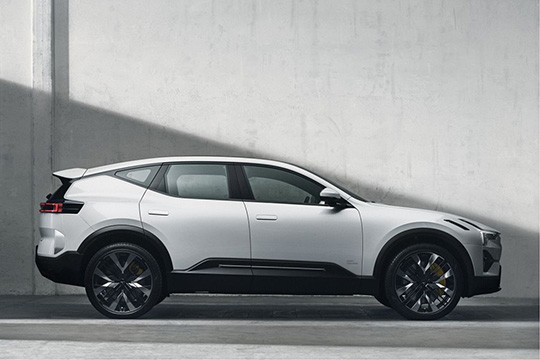