1 Polestar 2 Acceleration and Top Speed Tested on the Autobahn

Doug DeMuro Drives Polestar 1, “It’s Unlike Any Volvo You Have Ever Seen Before”

Doug DeMuro may be a Porsche enthusiast at heart, but he’s also open to the most modern automobiles out there, cars like the Polestar 1 for example. As the headline implies, he certainly likes the plug-in hybrid grand tourer that Volvo makes in China.
21 photos

The review starts with the exterior styling, described as “gorgeous” for all the right reasons. Even the door handles look like someone has put a lot of thought into the design, which does explain why Polestar is charging more than $150k for this car.

Another reason for the exorbitant starting price is rarity. Only 1,500 units will ever be made for the entire world, and all of them feature a state-of-the-art powertrain that combines a twin-charged gasoline engine and two electric motors at the rear. Combined output? That will be 619 horsepower and 717 pound-feet of torque.

The production-ready vehicle sweetens the deal with quirks such as “a window in your cargo area to see some hybrid stuff.” The Prius or Prius Prime cannot boast that, but as opposed to Polestar, Toyota is specialized in mass-market vehicles.

Noticed the trunk lid spoiler? As expected of a car of this caliber, the 1 allows the driver to raise or lower it at the touch of a button. The interior may be luxurious, but to be frank, there’s not a lot of legroom for the rear passengers. Worse still, you have to undo the seat belts up front before getting into the rear of the Polestar 1. The curvature of the roof, however, is the biggest complaint.

A car “unlike any Volvo you have ever seen before,” the plug-in hybrid from China is “pretty impressive and unusually silent” from the driver’s perspective. As for the Doug Score, well, the Polestar received 66 points, slotting under the Mercedes-AMG GT S and Ferrari California T. 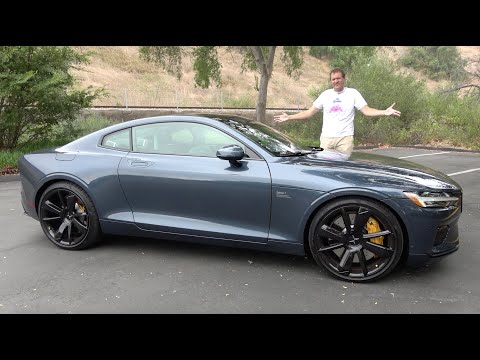