1 BMW 3.0 CSL Hommage Takes Its Trippy Camouflage to the 'Ring, Might Be Capped at 50 Copies

5 A Look Back at the Timeless BMW 3.0 CSL, the Forefather of All M-Badged Bimmers
Car video reviews:
Up Next

After lots of testing in all sorts of environments, BMW has finally pulled the wraps off the 3.0 CSL. The model has just debuted as part of the BMW M’s 50th anniversary celebrations, and just as we expected, it will be capped at 50 units, all of which will take around three months to be put together.

A future collectible with a yet undisclosed price tag, the 2023 BMW 3.0 CSL packs the brand’s most powerful straight-six engine with direct injection. It is based on the same 3.0-liter mill found in a variety of M-branded cars, and its displacement has increased to 3,153 cc. It pumps out 560 ps (552 hp / 412 kW) and 550 Nm (406 lb-ft) of torque and works in concert with a six-speed manual transmission, and rear-wheel drive.

BMW is keeping the performance numbers close to their chest for now, stating that it features a rear differential with “superior dynamics.” It is linked to the DSC, optimizing traction on various surfaces, and building up a locking effect of up to 100%. Dedicated suspension, with double-joint spring strut at the front, and five-link at the rear, electronically-controlled shock absorbers, electromechanical steering with variable ratio, and M carbon ceramic brakes are other highlights of the build. Everything was integrated into the chassis, and fine-tuned on public roads and racetracks, including the Nurburgring.

Since it was inspired by the world of motorsport, the BMW 3.0 CSL has a dedicated Traction Control, with ten levels of adjustment. It is also a lightweight proposal, sporting carbon fiber reinforced plastic (CFRP) in the construction, on “virtually all bodywork sections,” the automaker says. The hood, roof, trunk lid, and front and rear aprons were made of carbon fiber, glass fiber reinforced plastic was the material of choice for the roof spoiler, and there is a titanium rear silencer too, and cast aluminum precision struts under the hood.

Further contributing to the weight reduction is the rear-seat delete with storage compartment for two helmets, CFRP door cards, reduced acoustic insulation, and M carbon front seats. Black Alcantara decorates the seats and steering wheel. The headliner has an anthracite look, and there are a few matte carbon surfaces on deck as well, together with M seatbelts, and contrast stitching. The model’s name was embossed into the door sill trims and seat surfaces, and the white gear shifter is said to “symbolize the classic form of interaction between driver and vehicle when changing gear.” The typical M buttons and the push-start one have red look.

An ode to the 1973 3.0 CSL ‘Batmobile,’ the new 3.0 CSL boasts the same racing livery on the outside and has yellow headlights that are an homage to the M4 GT3, which won the drivers’ and team DTM championships in 2022. Beefier wheel arches that make room for 20-inch front and 21-inch rear wheels, wrapped in bespoke tires, and modified rear end, complete with the wing, help it stand out next to the G82 generation of the M4, on which it is based, and gives it extra credit on top of the M4 CSL that was unveiled earlier this year. The latter has 550 ps (542 hp / 405 kW) and 650 Nm (479 lb-ft) of torque 3.0-liter straight six, needs 3.7 seconds to hit 100 kph (62 mph) from zero, and it holds the record for the fastest BMW production car on the Nurburgring Nordschleife. 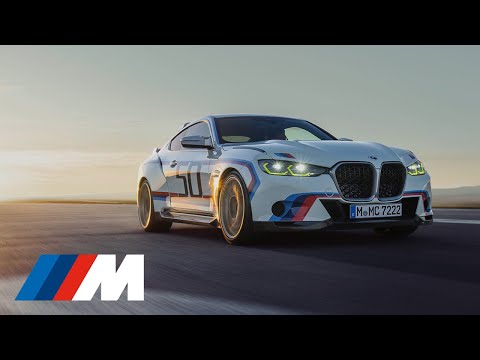