The idea of buying a kit vehicle might not bring to mind a luxury lifestyle, just like the thought of building your own helicopter at home will definitely get you thinking that it’s not the safest way to move about. Either way, Hungarocopter would like a word.

Hungarocopter, as its name clearly says, is a Hungarian-made helicopter. In fact, it’s the first ultralight aircraft designed and manufactured in Hungary, with applicability in both the civilian and military fields. It is more cost-efficient, lighter and with better maneuverability than direct competitors, Hungaro Copter Limited, an affiliate of the Hungarian SteelRiders and the builder of this peculiar aircraft, says.

December is Celebration Month on autoevolution, so we’re hosting a month-long virtual party in which we (duh) celebrate a lot of stuff, including luxury transportation. And nothing says luxury like a personal mobility solution such as a personal helicopter: just one step below private jet ownership and a full mile ahead of an entire fleet of chauffeured rides. Hungarocopter has been delivering just that since 2007, when the seed of the idea for an ultralight aircraft was first planted.

The thing about Hungarocopter is that it didn’t start out as a luxury option, though it was far from cheap. Instead, the idea was to deliver the smallest aircraft possible, while making no compromise in terms of performance and safety. The first version, designed by Zoltan Juhasz, rather uninspiredly named HC-01 and introduced in 2010, debuted as a kit aircraft that could be operated even by inexperienced pilots – as long as they had some €76,000 (roughly $80,000 at the current exchange rate) and 300 hours for the assembly to spare.

The HC-01 was the most rudimentary thing, which made sense given its goal of being very lightweight and easy to put together in a home garage. It had a single main rotor and tail rotor, a single-seat open cockpit, no windshield, skid landing gear, and a choice between a four-stroke 135 hp (101 kW) Subaru EJ22 or a 160 hp (119 kW) Subaru EJ25 automotive conversion engine.

The HC-01 was stable and reliable, and just as importantly, in due time, it was properly certified for flying. You could say that you bought a kit helicopter and that you built it yourself, but in the end, you got a machine that did what it was supposed to, and this translated into success on both the local and international markets.

With more orders came improvements. The HC-01 soon included a self-developed, patented electric rescue system (ERS), which serves as backup in case of an engine failure and allows for safe landing. The option of an enclosed cockpit was added, as well. In 2021, HC-02 was introduced, still retaining some qualities from its predecessor but with a decidedly more professional vibe. The Hungarocopter had outgrown its DIY kit phase and was now a proper aircraft.

The Subaru automotive engine was replaced with an aircraft engine, a Rotax 915 S, for enhanced efficiency both in terms of performance and operating costs. The cabin is enclosed by default on the HC-02, offering seating for two, and a total payload of 225 kg (496 pounds). The HC-02 itself weighs just 325 kg (716.5 pounds) empty, so it remains an ultralight aircraft.

Maximum range is of 450 km (279.6 miles) and maximum endurance of 2.5 hours, with a cruising speed of 87 knots (100 mph / 160 kph) and a rate of climb of 1,500 feet (457 meters) per minute. The HC-02 is the sum of many years of development, so it integrates several patented innovations, besides the ERS introduced in the predecessor. It also has an automatic anti-tip device, patented high-efficiency and quiet-running rotors made of carbon composite, and a center of gravity offset by means of a movable fuel tank system.

Pricing for the HC-02 has not been disclosed to the public, though Hungarocopter makes sure to show it off whichever chance it gets at trade shows. The reason for that is that HC-02 is, for the time being, certified to fly only test flights in Hungary and Slovakia, but the team is hoping for the small rotorcraft EASA CS-27 certification, which would allow them international expansion.

“We are committed to producing a premium quality, multi-purpose helicopter with high flight safety, which is suitable for both civilian and government use, with the highest level of operation in mind, keeping the needs of our customers in mind," Hungarocopter says. If you have money to burn and have been holding your breath for all those flying cars (eVTOLs, to be more accurate), this would be a nice alternative in the interim. You’re welcome. 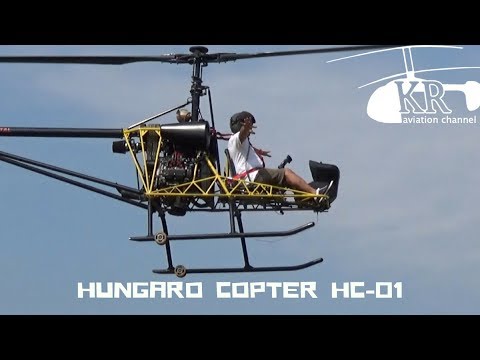