2 Pioneering Corridors for eVTOL Cargo Operations to Be Built Between the U.S. and Canada

3 The F1-Inspired McLaren Solus GT Boasts an Impressive V10 Engine, Will Only Have 25 Owners

5 On Board Sky Cruise, the Gigantic 5,000-Person Airplane Hotel Running on Nuclear Energy
Up Next

Elena Gorgan
The sky is the limit – both for dreams and man in physical form. Recent years have brought countless advances to the aviation industry and these, in turn, are reigniting the dream of hypersonic airliners. This time, there’s a more eco-friendly spin to it.
12 photos

This explains why older aircraft concepts are getting attention once more: where they once seemed but a hopeless dream, they are now closer to reality. Still dreams, but a fraction more feasible, should anyone venture to take the risk on them.

So far, no actual aviation company has taken a risk on Oscar Vinals’ design, the majority of which focus on innovative, hybrid or fully-green aircraft. In light of his 2018 design called HSP Magnavem, which would translate loosely to “big bird,” going semi-viral once more, he tells The Sun that only academics are interested in an aircraft of this kind – for now at least. He’s not losing hope, though, and believes that the future could look something like this.

If Magnavem looks familiar or Vinals’ name rings a bell (or that of his design studio, Ovis Design), it’s because he’s been in the news recently, though with a different but still old concept. Earlier this month, the Sky Whale reemerged, another gigantic aircraft that aimed to bring luxury, stability and a reduced carbon footprint to today’s airliners. In a way, Magnavem is Sky Whale’s bigger, fancier, and faster sibling.

Magnavem is a hybrid aircraft that uses a compact fusion reactor (CFR portable) to create electric energy, hydrogen fuel, solar panels, and a CO2 cleaning system, among others, to deliver hypersonic flights to the public with minimal to zero impact on the environment. Propulsion would come thanks to four oversize hybrid engines powered by electric-hydrogen fuel and two Ramjet engines. Costs would eventually become affordable, Vinals says for the British publication, though in an initial stage, they would reflect the kind of luxury amenities available onboard.

According to Vinals, Magnavem would use multi-directional dielectric barrier discharge (206 MD-DBD) plasma actuators to control the airflow over the fuselage and the wings, and achieve maximum flying performance. There would be an artificial intelligence system onboard to help the pilots, and technology like a micro-pulse coherent Doppler LiDAR system that would detect areas of turbulence and avoid them, thus reducing vibrations.

The delta-shaped aircraft would have a capacity of over 500 passengers, across two decks. The lower deck is the “super tourist” area, which is a fancier way of saying you’d be flying coach. Modular furniture would allow for a passenger capacity between 280 and 360.

The upper deck is the business and first class, comparable to a flying luxury cruise. Vinals imagines a 140-seat capacity for this upper deck, but it would also include private suites, wellness and sauna areas, and virtual reality. The roof over the upper deck would be made of glass that could, at the touch of a button, turn opaque or transparent to offer unparalleled views.

The 70-meter (230-foot) aircraft would offer “generous personal space” for folks on the lower deck, and “all imaginable luxuries” for those up top. More importantly, though, it would offer the convenience of a very short (and relaxing) flight: Vinals imagines the Magnavem would travel at top speeds of 1.5 mach (1,852 kph / 1,151 mph) and soar to altitudes of up to 15,400 meters (50,525 feet).

Magnavem sounds like a dream, alright, but Vinals is adamant that it’s not an impossible or a useless exercise of the imagination. “I don't design concepts merely to be only beautiful or for a sci-fi experience, all projects are based on previous technician studies with a lot of accurate information, so the result is a realistic and feasible concept,” he tells the same media outlet. He believes that, with the advances in the industry, his concepts will one day usher in a new era for aviation. 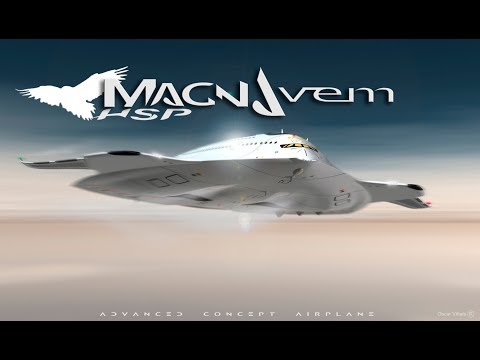