Stephen Rivers
SEMA invited the CF1, and after taking a quick but deep dive into the details with Dave Kindig, it's clear why. Kindig is the man at the helm of Kindig-it Designs, and the CF1 is a 100% custom 1953 Corvette with an LS7 tuned by Lingenfelter.
6 photos

Take one look at the CF1, and from the very first glance, it's clear that it's nothing like the original. It might be tough to pick apart what's so different, though. The grille is obviously unique, but it goes much deeper than that.

The headlights, bumpers, grille, and trim are all sandcasted pieces. They're all 100% unique to the CF1 Roadster as well. Perhaps more amazing is what's been done to accommodate taller drivers.

The old original C1 Corvette was built for smaller folks. That makes it hard for anyone over 6-foot tall to really fit and enjoy the car. Kindig went the extra mile to change that. First, he elongated the doors for better ingress and egress.

Then, he stretched the cabin itself. He didn't stretch the whole car, though. The wheelbase is identical to the original car. Then he lowered the seats and pushed the kick panel forward to provide more legroom. Now, someone as tall as 6'5" can fit inside without looking silly, according to Kindig.

That's despite the fact that they actually chopped the windshield more than 3 inches to give it a sleeker look. The car sits on 21- and 22-inch wheels, and each fender has been gently massaged to wrap around those tires perfectly.

Then he gets to the engine, which is where Lingenfelter comes into play. They've been tuning and building Corvettes and Corvette engines for decades. In fact, they've expanded now to include almost any modern GM product with a V8. So yeah, you can have a Chevy Silverado with a supercharged Lingenfelter V8 under the hood.

For the CF1, they didn't need to bother with forced induction, though. Instead, Dave Kindig team fitted Borla 8-stack injection and LS3 heads onto an LS7 block. Then they custom-tuned it to get some 673 horsepower and 618 lb-ft of torque from it.

The CF1 is fitted with Wilwood Engineering disc brakes and Michelin Pilot Sport 4S tires to keep that much power and torque in check. Keeping the weight down helps it, too, though.

The entire carbon fiber body is made by Doug's Performance Corvette's, and it helps this roadster tip the scales at 3,025 pounds. That's will a full tank of fuel, by the way. Inside, it's just as custom with a hidden Kicker audio system, Vintage Air heating and air conditioning, and Dakota Digital gauges.

It really is a testament to how utterly stunning a vehicle like this can be when every detail is meticulously considered. 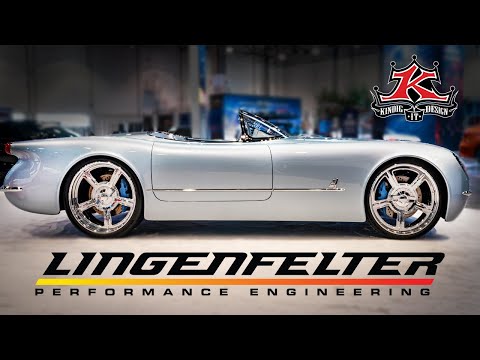