1 Move Over, Everyone, It's Time for the LR Defender V8 and RR Sport SVR to Go Drag Racing

Land Rover fitted a V8 in the new Defender, and it is a supercharged 5.0-liter motor that pumps out 518 horsepower (525 PS) and 461 lb-f. (625 Nm) of torque to go along with the massive power figure. It is no secret that the result is fairly quick, but the time has come to see one go flat out on a section of unrestricted highway in Germany.
6 photos

As you will observe, the growl of the supercharged V8 is just what the doctor ordered for the most powerful production Land Rover Defender to date. While its owner will have to decide regarding their intentions with the vehicle every time they order new tires, it may be a sacrifice that many will make since they have gone for the V8 option.

If we are being too vague here, the idea is that the best tires for off-roading are the worst for on-road driving, especially in high-speed situations, as well as in conditions that require the best possible grip on asphalt.

In many cases, off-road specialized tires are great at their main job, but terrible in other situations, and this includes wet roads, where hydroplaning will be the norm.

Attempting to drive an off-roader with the described tires on the highway will result in more noise than most are comfortable with, and it will also have a disturbing effect on the braking distances of their vehicles. The sad part is that some people are not aware of this, which means that they are putting themselves, as well as others, at risk while driving on the road at near highway speeds with their off-road tires.

When opting for the best possible behavior on the road, the described vehicles with road-focused tires will have to leave most of their off-roading ambitions for the day when they are suited with the according tires.

Road-focused tires will gather dirt, sand, or mud too quickly, which will lead to the vehicle becoming stuck once their grooves are full and the driver makes a mistake in their off-roading activity. It is that simple.

With that being written, this is what a Defender V8 sounds like when someone takes it for a couple of acceleration tests, as well as a top speed run on the German autobahn. 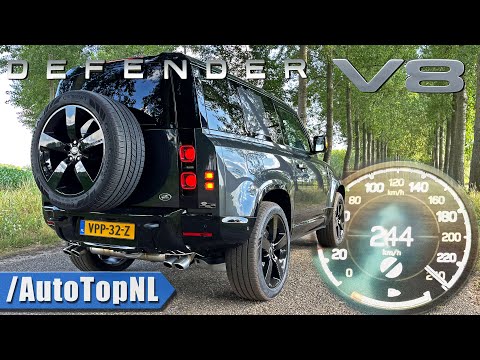