Move Over, Everyone, It's Time for the LR Defender V8 and RR Sport SVR to Go Drag Racing

Here’s a question that not many petrolheads will ask: which one is quicker in a straight-line sprint between the Land Rover Defender V8 and its more luxurious cousin, the Range Rover Sport SVR?
9 photos

Bet you haven’t thought about it, and if we are wrong, then you have come to the right place, as you are about to see the two fast SUVs engage in a couple of direct fights, in the hands of Sam CarLegion on YouTube. The video was uploaded a day ago, so the family feud likely took place recently.

Which one holds the upper ground in terms of power and straight-line performance? Well, the balance slightly tilts in favor of the Range Rover Sport SVR, which is more powerful, and a bit more agile to 62 mph (100 kph). In fact, hitting that mark takes 4.5 seconds, almost a second faster than the more rugged model.

Having seen what the official spec sheets say, do you actually think the Defender V8 has what it takes in order to beat the Range Rover Sport SVR in a straight line? The video that you are about to watch answers this question, as the guys behind it have subjected the two high-riders to a couple of races, both from a standing and a rolling start. That said, you know the drill. 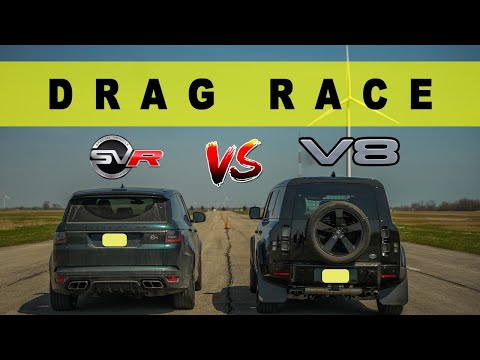