Ever since Land Rover bestowed the 2022MY upgrades upon its legendary, reinvented Defender, most people have been raving about the new capabilities of its flagship 5.0-liter supercharged V8. Especially the quarter-mile ones...
27 photos

Both the three-door 90 and five-door 110 versions have the same beast under the hood, but of course, the former does not make too much sense. Instead, the latter is more composed and available for a variety of additional activities, chief among them being the ability to duke it out with the other odd dragstrip heroes.

Naturally, Land Rover did not intend its new Defender V8 for quarter-mile shenanigans, and the same can be said about the king of dune-bashing and rock-crawling pickup trucks, Ram’s 1500 TRX. However, we bet everyone over at JLR or Stellantis knew those two would face a multitude of opponents both at official and improvised dragstrips.

Recently, even in the face of great icy weather adversity, Sam, the host of the Sam CarLegion channel on YouTube, has prepared another odd drag and roll encounter between two menacing off-road vehicles at the regular, windy airstrip venue in Canada. And what do you know, the Defender V8 and TRX finally met. We all knew that was just a matter of time, right?

Of course, everyone knows that one is a 518-hp five-door premium SUV and the other is an offensive 702-hp Hellcat-powered pickup truck, so they should not be compared directly. But they do have things in common: huge price tags, AWD, and supercharged beasts under the hood. Plus, one is lighter and less powerful than the other, so perhaps this matchup would be more balanced than anyone could imagine.

Well, that is not going to happen. So, after an unusually lengthy seven-minute intro (which does include exhaust sound checks), the great random matchup gets down to business with the first round of this strange race. At the 7:59 mark, there is just one brawl from a dig, but that is by far enough to settle the winner.

By the way, the loser does not eat the other one’s dust... and instead gets a host of falling ice debris! Then, from the 9:40 mark, the roll settles the conundrum as the skirmish draws “closer, but not that close!” 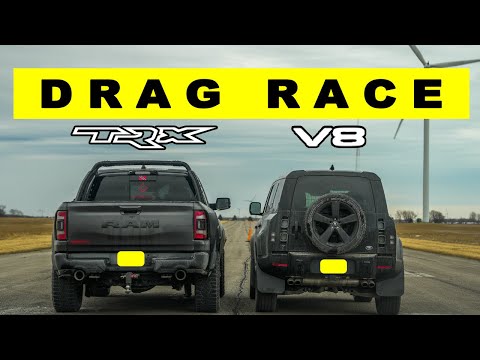