3 For All You Yacht-Hoppers, Kim Kardashian Has a Pair of Gloves to Elevate Your Swim Look

4 For a Casual Night Out, Kim Kardashian Continues to Exude Wealth With Her Maybach S-Class

Kim Kardashian is a lot of things, but one thing she is not is “relatable.” Once Paris Hilton’s stylist, she is now one of the most recognizable faces in showbiz, with a billion-dollar business empire and the tastes of a billionaire in everything from fashion, real estate, and luxury cars.
18 photos

We may just have found the one thing that makes Kim Kardashian (slightly) relatable: she too struggles with mundane stuff, like getting to open the door of her car. The latest video updated to her social media is a long-promised tour of the new office space she has set up for her SKKN line, which is her skincare and makeup collection.

“Office” is an understated word, because we’re talking about a 40,000 square-foot (3,716 square-meter) two-story space, in which Kim drives right inside in her custom Mercedes-Maybach S-Class. The whole thing is on purpose, of course: the office is designed to match her California mansion, which is designed to match her collection of custom cars so, implicitly, the office matches any of those cars. Kim has been driving the luxury sedan a lot in recent days, and she chose it for this video as well.

You can see the full tour in the video below: it’s a must-see if you’re into minimalist styling bathed in neutral colors only, with almost spartan furnishes and the occasional touch of brutalist design, and expensive furniture that required further customizing by Kim. Technically, the whole space is styled by decorators Tommy Clements and Waldo Fernandez, with Michele Lamy from Rick Owens working on the furniture, and art by Vanessa Beecroft.

For auto enthusiasts, the highlights come at the beginning and the end of the video: Kim’s arrival and the preparations for departure in the same Maybach. The sedan is just one of the cars Platinum Motorsports has recently done for Kim, and it comes in a shade of gray created specifically for the star.

The video starts with a door slam that must’ve been heard all the way to the seven gates of hell (the echo in the cavernous office space doesn’t help), and it ends with Kim’s attempts to get inside her own car. “Anyone know how to get into my car?” Kim asks her staffers, before she finally gets it: you have to press your palm on the door handle to open. “If it was like the Scream movies, I would have been dead by now,” she laughs. Funny, but she’s not wrong. 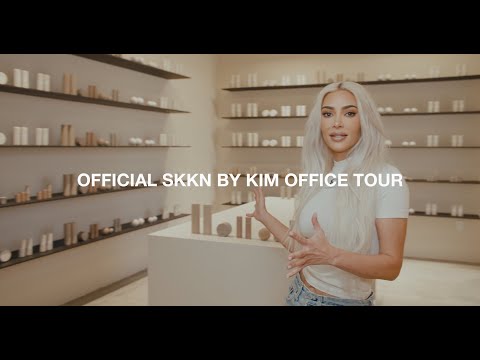