Despite its seemingly bizarre name-choice, the DSH has nothing to do with anything outside the car engineering realm.

Its designation stands for "Doppel Sechs Halbe" or "double six half", pointing at the car's six-cylinder 5.2 L unit derived from the larger and more powerful DS V12 design. Following the development of Karl Maybach's innovative "typ 12" engine that developed as much as 250 hp in certain models, the DSH was introduced as a smaller but still peppy cousin with a power output of 130 hp. The plant pushed the car to a top speed of 87 mph (140 kmh) via a 4-speed sequential transmission. 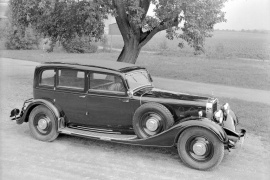