When WWII started, most carmakers had to adapt to new conditions, but Maybach considered that they had a mission to fulfill, and that was to produce exclusive vehicles.

With the SW 42 range introduced in 1939, the German automaker tried to attract orders from its country's government. Unfortunately for it, though, Mercedes-Benz was the preferred carmaker by the Third Reich, so Maybach had to rely only on a few rich customers. Moreover, while most of the cars were bodied by other coachmakers, such as Spohn or Vysoke Myto, it also offered a Maybach-branded body, which was not that advanced in its look but spotless in terms of quality.

The SW 42 Cabriolet shared the same front side with its sedan sibling. It featured valanced, long front fenders that emerged into the side steps towards the rear quarter panels. The body-on-frame construction allowed for a four-door open-top bodywork with removable side windows. Its retractable canvas roof was folded neatly behind the rear passengers, and it could have been completely removed for a sleeker look of the car. The front, rear-hinged doors allowed the driver and side occupant to quickly egress from the car and open the rear, front-hinged ones for the passengers.

Inside, the leather-wrapped cabin sported wide bucket seats at the front and a comfortable rear bench, wide enough to fit three people. As a luxury feature, the rear passengers had access to a cabinet with drawers and doors where they could store bottles, glasses, or picnic baskets.

Under the hood, the carmaker installed the 4.2-liter powerplant that, due to the reduced compression ratio, provided just 138 hp (140 PS). It was mated to a four-speed manual gearbox that didn't require a clutch to shift from third to fourth gear. 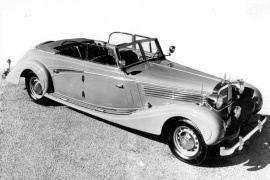