4 Top Gear Drives the 1,817-HP Hennessey Venom F5, Socks Get Blown Off by the Performance

Introduced for the 2020 model year, the Shelby GT500 is Ford’s most powerful series-production car. Not even the limited-run GT can match it on paper, but on the other hand, some customers would like a bit more than 760 horsepower and 625 pound-feet (847 Nm) at the crank.
16 photos

There are plenty of tuning shops in the United States that are much obliged to squeeze out more horsepower and pound-feet of torque from the supercharged V8 engine of the Shelby GT500. Codenamed Predator, the 5.2-liter motor belts out a whopping 1,000 horsepower and 850 pound-feet (1,152 Nm) at 4,800 rotations per minute in Hennessey Venom 1000 form.

John Hennessey is much obliged to demonstrate his tuning package in the featured clip, both in terms of straight-line performance and smoky burnouts. “I think this car would run with my McLaren 765LT. It would give it a real good run for its money,” said the head honcho of Hennessey.

Approximately 900 horsepower to the wheels is John’s estimate on E85. Fill up with 93-octane fuel, and power goes down by around 100 ponies.

The blistering performance of the Venom 1000 comes from a multitude of go-faster upgrades. The high-flow air induction opens the list, followed by the supercharger’s hub assembly, drive pulley, and belt.

Telltale signs that you’re in the presence of a Hennessey-tuned Shelby GT500 include the serialized engine bay plaque, interior badging, and exterior badging. Each build is covered three years or 36,000 miles (make that approximately 60,000 kilometers), whichever of the two comes first.

Pricing is available on request, but given that a brand-new Shelby GT500 can be configured to $100k, you’re looking at an expensive tire shredder. 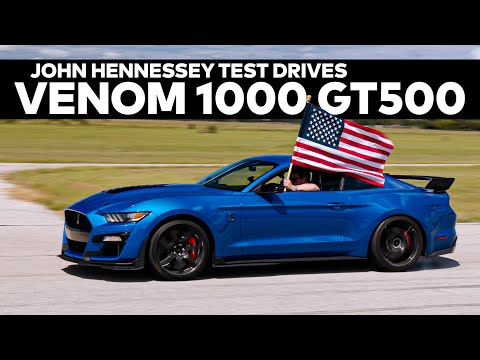