1 Hennessey Blowing the Top Off the Venom F5, Roadster Due This Summer With 1,817 HP

4 Hennessey Says All Venom F5 Hypercars Were Spoken for, Deliveries Starting This Year

Top Gear Drives the 1,817-HP Hennessey Venom F5, Socks Get Blown Off by the Performance

It’s been said that Americans don’t know how to screw together a car, but that’s not entirely true. Well, not when it comes to the Hennessey Venom F5 anyway, which is one of the most extreme vehicles ever made, with incredible performance on tap.
7 photos

A truly phenomenal machine, so far the Lone Star State tuner-turned-carmaker hasn’t let anyone outside the company take it out for a spin. Nonetheless, that has recently changed, as Top Gear got up close and personal with it, where else, but in Texas, putting it through its paces on a closed course, and on public roads.

John Hennessey’s pet project has a carbon fiber tub, carbon fiber panels, and more of the lightweight material inside, joined by leather bedecking several parts, including the bucket seats that are quite comfortable for such a ride. It has two screens, a yoke steering wheel that appears to have come straight from a racer, and minimal sound deadening. As a result, the driver is even more connected to the car via the sound, heat, and vibrations.

Bathed in lots of character, and combining everything with truly jaw-dropping performance, the Venom F5 uses a GM-sourced V8, albeit modified to the teeth by Hennessey. The twin-turbo 6.6-liter mill produces 1,817 horsepower at 8,000 rpm, and rockets the car to 62 mph (100 kph) in less than three seconds. That’s the targeted time anyway, alongside the 0 to 124 mph (0-200 kph) in less than 5 seconds, and a maximum speed in excess of 311 mph (500 kph).

All 24 copies of the Hennessey Venom F5 were sold out, each one at well over $2 million, and the example that Top Gear got to enjoy in different environments is actually a customer car. But we’d better let them take it from here, and talk you through some of the hot stuff in what is a first hands-on review of the model. 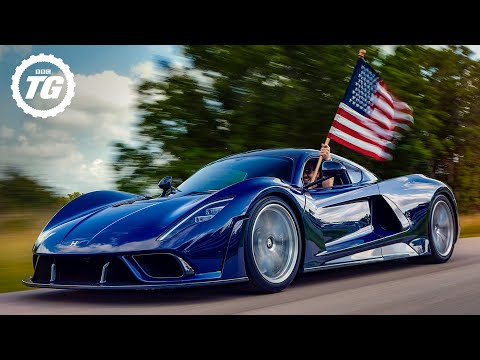