Humans have always wished they could fly and even though we are yet to do it as effortlessly and graciously as birds, we have still found a way to conquer the skies. The only problem with relying on machinery to be able to fulfill that dream is that most of us can’t afford our own flying car. But that might soon change, thanks to Swedish eVTOL developer, Jetson Aero.
6 photos

Jetson Aero teamed up with camera company Insta360 to tell the story of a dream come true.

Jetson Aero has been around since 2017 and, in 2018, it already finished its first flying car prototype. The company’s mission is to unlock the skies for everyone by manufacturing and commercializing the most affordable and easy-to-fly eVTOL (electric vertical take-off and landing) aircraft on the market. And after years of hard work and dedication, that goal was partially achieved. In 2021, the Swedish developer launched the Jetson ONE, describing it as a Formula 1 racing car for the sky.

What makes the Jetson ONE such an insanely popular product is the fact that it is budget-friendly (well, for a flying car…) and doesn’t require a pilot license to be flown in the United States. Jetson Aero claims anyone can learn to fly the aircraft within just five minutes.

Jetson ONE has an aluminum and carbon fiber construction, packs eight powerful motors, and can still fly safely in case it loses one of the motors. Additionally, it also features a triple-redundant flight computer, obstacle avoidance, terrain tracking, and a ballistic parachute with rapid deployment time. The flying car can reach a speed of 63 mph (102 kph) and offers a flight time of 20 minutes per charge.

Last month, Jetson shared footage of the aerial vehicle completing the world’s first eVTOL commute, with the pilot being no other than Tomasz Patan, the company’s founder and the creator of the Jetson One. Patan says it flew the aircraft from his home to his workplace, reducing his commuting time by 88 percent.

The Jetson One has become so insanely popular that the entire production for 2022 is sold out, which is not surprising, given that the price of the flying car is $92,000. The company is now preparing for mass production.

Take a peek at the video below to find out how the Jetson One flying car was born. 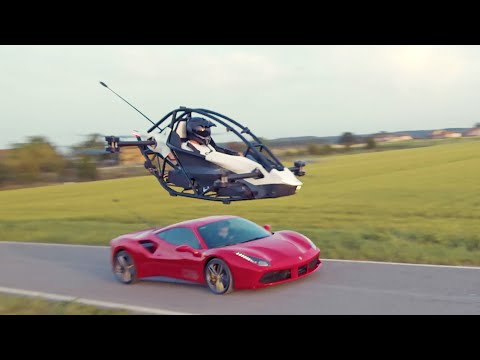