4 The Famous $92K Personal Electric Aircraft Is Almost Sold Out, in Record Time

5 Flying Your Personal Electric Aircraft Through the Woods at 63 Mph Is How You Enjoy Nature
Car video reviews:
Coverstory

The push for all-electric vehicles, whether on the road, in the air or on water, stems from environmental concerns, as well as the need for more affordable and convenient transportation. Despite what you might have read, this so-called flying car, the Jetson One, is focused on neither of these.

Jetson One, the Electric Flying Car of Tomorrow Delivered Today

Jetson One is an eVTOL (electric vertical takeoff and landing vehicle), a human-size manned machine that is oftentimes referred to as a flying car, even though it has no wheels and it’s closer to a drone (in appearance) than to a passenger vehicle. Jetson One is, as of the moment of press, the hottest eVTOL on the scene, hailed by many as the future of urban and personal mobility: electric, fun, fast, reliable and safe.

If this is the future, Jetson One delivers it today – by which, we’re to understand “very soon.” Unlike most startups, Swedish startup Jetson Aero promises deliveries for early 2023 on 2022 pre-orders. This isn’t a lot, but it’s more than what other eVTOL companies have been promising: 12 units will be made in the first round of production, followed by 137 more units for the 2023 model, as the company expands and seeks to bring in more investors.

Jetson One went viral last year, when a pre-production prototype was taken through a “stroll” in the woods after the official launch. This was the first time founders (and inventors) Peter Ternström and Tomasz Patan had a brush with Internet fame, even though they’d been working on the eVTOL since 2017. A test model was debuted in 2018 and, several iterations later, it became the pre-production model shown in the gallery above.

So what exactly is it that makes this eVTOL stand out from a large crowd of similarly-promising personal aircraft? The difference is to be found in the inventors’ promise that it will show that “anyone can fly.” The Jetson One is a one-passenger eVTOL that will not require a pilot license and that, according to Patan, can be operated after as little as 5 minutes in the training room. Still, Jetson Aero will offer a 2-day training program for owners of the first-series units (all 12 of them). You can’t compromise on safety.

Another difference between Jetson One and other eVTOLs is that, unlike those, it doesn’t claim to solve the climate change problem, nor double as a suitable alternative for personal transport. Jetson One might be the future, but it doesn’t seek to solve any problem for the time being. Instead, it wants to be a fun – and very expensive – toy, so it creates a new segment on the market, to which it will cater exclusively.

To put it differently, this first flying car is a testbed for future technologies. Jetson Aero believes the future is electric and airborne, but the One won’t bring it about just yet. It will only deliver 20 minutes of fun times to rich owners, thus confirming what we already knew: flying cars are coming, but adoption will be slow, lengthy and at very high entry prices.

That said, those who can afford to spend $92,000 on a flying toy (with a $20,000 deposit required for a reservation) will get one hell of a mean machine. Patan describes it either as a jetski of the sky or a one-passenger personal helicopter, with an emphasis on safety and ease of use. The controls are unlike those on any other aircraft, consisting of a three-axis joystick to control the direction, a thrust lever that controls the altitude, and an open cabin that offers the “most profound sense of fun.”

Specific safety elements include an all-aluminum race-car inspired spaceframe safety cell design that will protect the operator in case of a low-altitude crash, triple-redundant flight computer, the possibility to continue flying if any one of the eight motors fails, and LiDAR sensors for terrain tracking and obstacle avoidance. A ballistic parachute with rapid deployment time is included, and the top speed is electronically capped at 63 mph (102 kph).

Tesla battery cells are good for just 20 minutes of flight time, with a full charge on 220V taking just one hour, or two hours on 110V. However, to further cut downtime, the batteries are swappable. Maximum flight height is listed at 1,500 feet, or 457 meters.

“The One has been designed with real world practicality in mind,” Jetson Aero says. Legally, you can fly it in open spaces in the United States and other territories without a pilot’s license or mandatory training, because it’s very light. Its light weight of just 86 kg (190 pounds) also helps with easy transport from place to place, as does the fact that it can fold and thus become even more compact.

Jetson Aero says that it will focus on crash-testing the One in the first half of 2022, before officially starting production on the first units. Deliveries will be of partly-assembled units, but worry not: “You complete the build. No special tools are needed,” the company says. “If you receive your Jetson at lunch, you will be flying before dinner.”

An easy-to-assemble, easy-to-pilot, easy-to-transport, safe, awesome, and all-electric flying thingy with great potential. If this is not the future of one-percenters, we don’t know what is. Then again, that’s what we thought of jetpacks too. 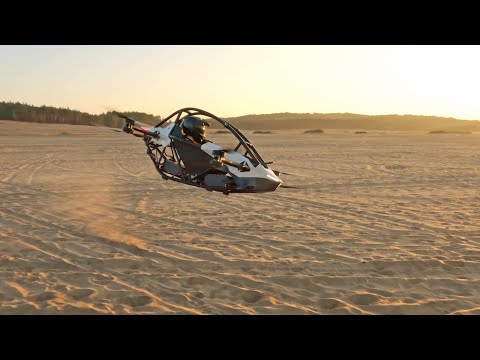