5 This 2001 Mazda RX-7 Is a God Tier Rotary Legend, Provides a Deafening Drive
Car video reviews:
Up Next

Do you think Henry Ford would have expected people to become obsessed with the automobile? Well, not everyone is going to take things so far, but petrolheads do it every day. And most petrolheads hold in their minds and hearts a dream car, a seemingly unobtainable Holy Grail on four wheels. For rotary enthusiasts, that car is the Eunos Cosmo.

Inside the Holy Grail of Rotary Cars: the '90s Eunos Cosmo

But we aren't talking about the first generation of the Cosmo, nor the second or third ones. The most advanced and wild member of the Cosmo family was part of the JC Series, built between 1990 and 1995. To understand why most rotary owners and fans are so obsessed with this car, you need to have a wider perspective on the Wankel engine. Felix Wankel presented the first rotary-engine prototype in 1957.Innovation Is Where Imagination Meets Ambition
Three years later, it was introduced to specialists and press from the automotive industry. It didn't take long for engineers at Mazda to take an interest in the project. They created an initial prototype, an engine with just one rotor, called the 40A, and started addressing issues like excessive oil consumption and chatter marks in the housing. At the 1963 Tokyo Motor Show, Mazda introduced the first Cosmo prototype, which used a 798 cc twin-rotor engine.

The Series I Cosmo that made it into production received an upgraded 10A unit with a displacement of 982 cc. Back then, this would produce a maximum output of 110 horsepower. If you've ever watched Jay Leno's Garage, you know that he owns one of these vehicles too! While multiple manufacturers experimented with the Wankel engine, Mazda was the one that pushed the envelope through the years, releasing multiple variants while continuously improving the technology.

In the '70s, Mazda built rotary-powered vehicles like the RX-2, RX-3, RX-4, and of course, the RX-7. Both the second and third-generation Cosmos offered customers a choice between piston or rotary engines. Interestingly enough, the 12A-turbo-powered Cosmo of 1982 was the fastest production car in Japan before being overtaken by the 1983 R30 Skyline 2000 Turbo RS. In 1990, the FC RX-7 was getting close to retirement, and it had a maximum output of about 200 horsepower, coming from a turbocharged 13B engine.Vision Is a Picture of the Future That Produces Passion
But Mazda had been working on something special ever since they launched the MX-03 concept back in 1985. Mazda wanted to come up with a car that had not one, not two, but three rotors and they decided to turbocharge it for good measure. And in 1990 they launched the Eunos Cosmo, a luxury Grand Tourer fit to rival the Toyota Soarer. The Eunos Cosmo was the first production vehicle with a triple-rotor, 20B engine.

And it was the first Japanese vehicle to use a twin-sequential turbo system on both its 13B engines and 20B engines. Speaking of which, less than 9,000 JC Series Cosmos were ever built. But when it comes to the Holy Grail of the rotary world, the 20B Cosmo, less than 4,000 vehicles ever left the factory. The 1,962 cc engine was rated for 300 horsepower and 297 lb-ft (403 Nm) of torque, and in stock form, it was quite silent to drive.

Go ahead and ask any rotary car owner or enthusiast how their dream setup would look like. Most of them dream of a 4-rotor setup, similar to what you can find in a Mazda 787B LeMans race car. But for financial reasons, a 20B engine is a much more attainable dream. Sure, some would rather have one with no turbos, others would go for just one, but I'm sure that there are people who wouldn't change anything on Mazda's unit.

Even in stock form, the Eunos Cosmo could run the quarter-mile (402 meters) in under 14 seconds, all while providing a smooth, luxurious ride. After all, this is the first production car in the world to feature a built-in GPS navigation system! There are several videos of Keiichi Tsuchiya drifting the Cosmo when it first came out, and a direct comparison with the Soarer on Tsukuba reveals the true potential of the rotary engine.

I must confess that I have never seen a JC Series Eunos Cosmo with my own eyes. If less than 4,000 were ever built, I dare not imagine how many of them still exist today. Interestingly enough, you may have to spend less for one of these than you would for an FD RX-7. A 20B version sold on BaT last year for just $13,752, but realistically speaking, you should have a budget of at least $25,000 if you're going to buy one today. 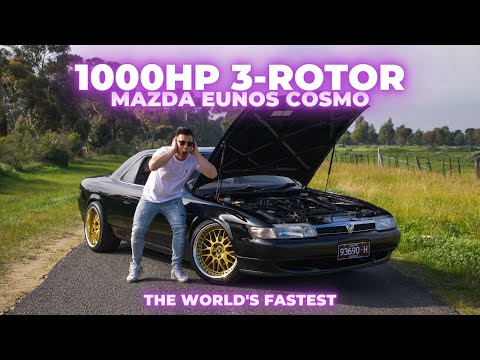 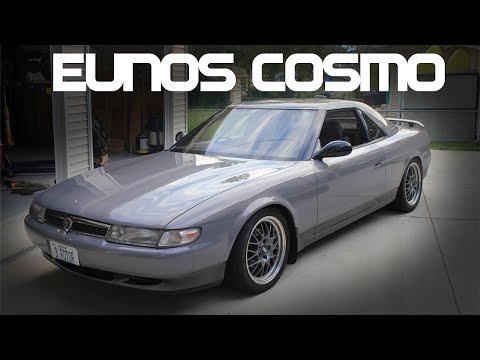