1 Low Mileage Toyota Corolla AE86 Has Had One Owner, Priced Like a 2021 GR Supra

Spotify Changes the Rule of the Game: The Driver No Longer Picks the Music

I first came across the Initial D series back in 2008, back when it was still on the air. Even though it originally aired in 1995, it took me 13 years to discover it. And it hit me so hard that I could only think of how much I wanted to go to Japan and experience the mountain passes while driving a JDM icon like the Mazda RX-7 or the Corolla AE86.

I've probably watched the whole series at least two or three times so far, and I feel like I'm already overdue for the fourth viewing. The fact that I ended up buying and building an FC RX-7 probably has some roots in watching the series in the first place. Even though my car comes in Brilliant Black, it still has the same soul and feeling like the "White Comet" of Akagi, which was driven by Takahashi Ryosuke in the original series.Running Through the '90s
To say the Initial D series has got a massive global following would be an understatement, but it's most likely the most hardcore fans are located in Japan. I've seen dozens of Tofu AE86 replicas over the years, and multiple replicas of the other vehicles in the series such as the blue Sil80, the Emperor Lan Evos, or the Night Kids R32 GT-R.

And, as it turns out, some people were so enthusiastic about the series, that they now own not just one, but several replicas. Now, we've featured some of Clay Wong's fast car reviews before, but now I'm starting to get slightly jealous as he's gotten his hands on two Initial D replicas, the Tofu AE86 and the Akagi RX-7 FC3S. As he takes turns driving both cars, we are treated to some splendid visuals and eardrum-pounding exhaust notes.

He starts off driving the Turbo II RX-7, which is a 1989 Series V model. As he talks us through the basic specs of the FC, we get to see Clay with a big grin on his face for the whole test, a key indicator this car is all about the "smiles per gallon". And yes, I know that is a clever way of trying to deal with the excessive fuel consumption of these vehicles, but if you've bought one, you have to be at peace with your decisions and stop complaining.Don't Forget to Premix
Clay further praises the way the car drives as he notes that: "There's a sense of balance in the chassis which is so remarkable, it feels lively and agile, and it just loves to rev!" I can further attest to that, as I've often found myself shocked at how well a 30 years old car keeps up with more modern vehicles round the corners. And the rotary engine does feel amazing when being revved, it's just like it could go on forever before changing gears.

What's even more exciting about rotaries is that you're required to drive them hard, every single time you take them out, as this prevents carbon deposits from occurring inside the engine. Although the FC was developed as more of a grand tourer, with it being considerably heavier than the previous FB, it still provides the driver with excellent feedback, and like Clay, himself notes: "It feels so darn good, and it invokes so much confidence!"

After having his way with the FC he moves on to the 1985 Toyota Corolla AE86. This is a GT Apex Trueno Sprinter version, and it was the main star of the Initial D series, with Takumi Fujiwara behind the wheel. This is an accurate representation of what an underdog is, as Takumi managed to win touge races against opponents with considerably more powerful vehicles, time and time again. Because what is power without control right?Speed Isn't Everything
Takumi had been using the stock 4A-GE engine up until a crucial point when, pushing the car too far, to keep up with the Emperor Lan Evo, it all fell apart. He blew his engine and had to call in the tow truck. This was one of the most emotional moments in the whole series, and he would end up driving his father's Subaru Impreza GC8F for a few episodes. But his father already knew this was coming and had planned an engine swap.

This brings me to the most interesting part of this Tofu 86 Replica. This is sporting the same engine Takumi would get to drive later on in the show, the Silvertop, 20V 4A-GE, which is rated for 155 horsepower and 119 lb-ft (162 Nm) of torque. Which might not feel like a lot today, but consider the fact that this car was already fast around the corner with the stock engine too.

Clay seems to be more enthusiastic about the AE86 as he drives it down the road, adding that "It feels so fast, this engine is comparable to Honda's K-Series, it just rips through the tarmac. This car feels like an extension of my body, and I know exactly what it's doing through all of the corners. There is so much feedback through the steering wheel" And if you've watched Initial D, or ever seen Keiichi Tsuchiya driving an AE86, you'll know that this is the very essence of this machine.Fill'er up, High Octane!
Keiichi Tsuchiya once said "The AE86 is a car that trains its driver", and it does seem that way seeing the reviewer going slightly over the limit, and having the rear of the vehicle coming out, only to have it right back on track with some precise countersteering. Driving the AE86 is like being in a time machine, as you find yourself going back to the '80s instantly.

But while driving cars like these, you always have to bear in mind the fact that back in the day, there were no driver aids to cover up your mistakes, you had to deal with everything yourself. This is not really a bad thing, but you do have to be careful, and Clay brings this up as well: "It's a car that requires the driver's full attention".

At the end of the day, this video is bound to get you "infected" in one way or another. Clay's enthusiasm while driving both these cars is quite contagious, and I'm definitely thinking about watching Initial D once again. Not to mention the fact that I can't wait to get the FC driving again, so I can experience more twisties in it with my fellow rotary buddies. 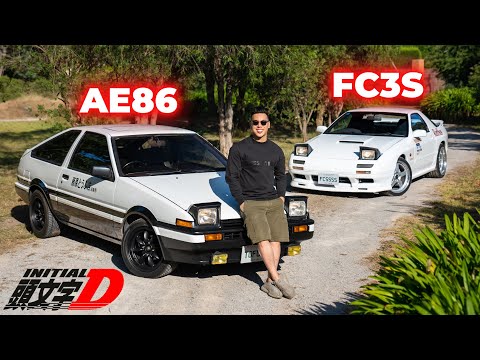