Toyota continues to impress with its crossover, SUV, and truck exploits. The latest was sporting glossy high-contrast aesthetics while on the Detroit show floor of NAIAS 2022, for example.
23 photos

The all-new 2023 Toyota Crown will arrive in North America after a long hiatus in early 2023 to signal the Japanese automaker has the proper high-riding mindset even when dealing with something that was a traditional sedan (among other passenger car body styles) not long ago. But they also have lots of other stuff for U.S. fans, from the small C-HR to the three-row Sequoia family SUV or the equally big Tundra.

Alas, need we remind you that Toyota made a glaring omission? That would be the fact that its latest Land Cruiser generation is not available in North America anymore and instead only its Lexus LX can be had for over $88k. Luckily, at least in the virtual world, that is not an issue, and anyone can have an LC 300 example for free.

Then, perhaps the regular Land Cruiser 300 is still not enough, so folks might want a GR Sport version to fiddle around. No worries, pixel masters have that covered, and then some more. But there is no need to take our word for granted. Instead, here is a great off-road case in point arriving here courtesy of the virtual artist better known as carmstyledesign on social media, who has presented us with yet another legendary full-size SUV - it's an iconic off-roader now.

So, after his recent stint with an adventurous, slammed, and widebody Caddy Escalade-V that bulked up to make sure no one will dare any soccer mom jokes, here is a Land Cruiser GR Sport that goes against the mall crawler stereotype. Thus, instead of trying to be a hulking SUV acting like a sporty car, this Land Cruiser GR Sport gives into its primary off-roader nature with the CGI help of a few amenities and immediately starts crawling on rocks in the short video embedded below. 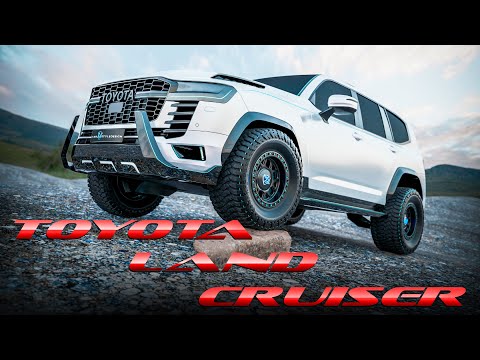