1 2023 Hyundai Ioniq 6 Prototype Spotted During Testing, Driver Is Not Happy To See Us

Hyundai Ioniq 5 Surprises in Moose Test, It Is Better Than You Would Think

The time has come for Hyundai's Ioniq 5 to go through the famous moose test. The all-electric model from the South Korean brand was tested by the Spaniards at km77 in a rear-wheel-drive configuration with 218 PS (214 horsepower) on tap, and it went better than expected.
55 photos

The example that was tested arrived at the track with 19-inch wheels in the described configuration, but Hyundai offers it with 20-inch wheels. In the case of the tested unit, it came with Michelin Primacy 4 tires in the 235/55 R19 size, with a 105W rating.

Its platform brother, the Kia EV6, went through the same test in early December 2021, so it was Hyundai's turn at the dreaded test. It is worth noting that the EV6 that was tested by the Spaniards at the time, on the same track, came with Continental ContiPremiumContact 6 tires in the 225/45 R20 H XL specification, which means that they were wider on the Ioniq 5's.

Having larger wheels and tires does not always bring a performance benefit, nor does it guarantee a poor result. In reality, the result of a test like this depends heavily on the type of tire used, its compound, tire pressure, asphalt temperature, humidity, and all the other things that you would expect to make a difference. We are referring to suspension design and settings, as well as its mass distribution between axles.

We have already covered the differences and similarities between the Kia EV6 and the Hyundai Ioniq 5. Coming back to the test at hand, which is performed following the ISO 3888-2 norms, both vehicles came with factory-fitted tires and wheels, and both were in their rear-wheel-drive configuration.

At the time of its test, the Kia EV6 managed to complete the maneuver at up to 78 kph (ca. 48.5 mph), which is more than the Porsche Taycan Cross Turismo did just weeks before it. Well, as you will observe, Hyundai's Ioniq 5 manages to shoot the ball out of the park on this test.

The Ioniq 5 managed to get an entry speed as high as 80 km/h (49.7 mph), but it does require setting the regenerative braking to its third level (out of four possible). It appears that that mode offers similar deceleration to a conventional vehicle and makes the car easier to control in this situation. One can only wonder what its N version would do. 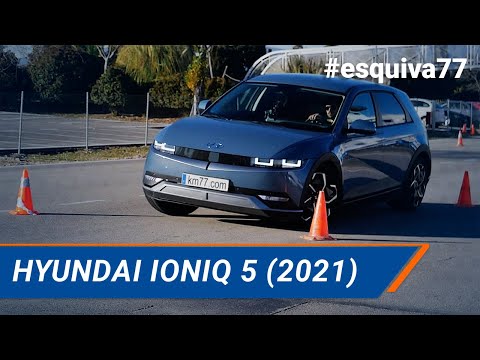