Mircea Mazuru
Honda has revived its CL scrambler bikes with the all-new CL500, revealed at the EICMA trade show in Milan, Italy. Read on to learn a bit more about the history of this motorcycle and what the new CL500 is all about.
71 photos

Honda has been getting smaller capacity motorbikes just right for riders worldwide by blending engine performance, easy usability, affordability, and individuality. Such bikes were the CLs from the '60s and '70s. They were scramblers – basically, they were CBs equipped with reinforced handlebars, high-mounted exhaust pipes, and off-road tires. They were designed to be enjoyed both on and off the road and soon became popular with collectors. However, the CL series was discontinued in the mid-70s when the CL200 and CL360 were canceled.

Fast-forward to 2018, the A2 license-compatible CMX 500 arrived in the Honda range. It was designed as a highly customizable old-school meets new-school vehicle and boasted specs irresistible to young riders. The model managed to become one of the top-selling custom bikes in Europe and served as an inspiration for the CL500.

Five years later, Honda decided to take a similar old-meets-new approach for its new CL500 motorbike. It has the same formula as the original CLs – the looks, engine, and durability are clearly inspired by the originals. Customization is also a critical detail that Honda incorporated in the new model – your imagination is all that's required, as the company says.

Mr. Hiroshi Furuse, Large Project Leader for CL500 Honda R&D, said, "We developed the CL500 as a machine that truly allows its owners to stand out from the crowd, and as a form of self-expression. It can be used and enjoyed casually – without hesitation – by the young generation in their daily lives and is designed to become a joyful and integral part of a lifestyle. In standard form, the off-road street style has a visual charm unlike any other model in the Honda range and can really inspire owners to take it further in any direction they wish."

The development concept for the CL500 project has been "Express Yourself." Honda has deliberately targeted a young and style-conscious demographic, and the CL500 comes in as the ideal companion on your daily commute, weekend ride, or even some off-roading. Moreover, as younger riders are usually into customization, Honda has prepared a range of accessories that enhance the looks and performance of the bike.

The tubular steel main frame gives the bike a unique style while allowing easy handling. The round fuel tank shape and upswept muffler give off a nostalgic vibe, alongside more minor details such as the tank pads and rubber fork gaiters. Another detail reminiscent of the original CLs is the high-level handlebar, angled to offer leverage when standing and sitting down.

The scrambler-style motorcycle is made to handle it all, from rough city streets to dirt roads. Ground clearance is 155 mm (6.1 inches); in the front, there's a 41 mm fork with 5.9 inches of travel, and the aft suspension comes with preload-adjustable shocks with 5.7 inches of travel.

Other notable features of the motorbike are the 175 mm diameter LED headlight, an LED taillight, and an LCD that displays information such as gear position indicator, fuel consumption, and individual indicator arrows.

The CL500 is powered by Honda's 471cc parallel twin-cylinder engine, which outputs 34.3 kW (46.6 ps) of power and 43.4 Nm (32 ft-lbs.) of torque. It's the same engine that the Rebel 500 boasts, only it has a different fuel mapping and a new intake. An assist/slipper clutch manages the six-speed gearbox.

Regarding brakes, the CL500 features a two-piston front caliper with a 310 mm (12.2 inches) floating disc and a rear single-piston caliper with a 240 mm (9.5 inches) disc. The brakes have been balanced to provide efficient braking in all conditions, and the ABS is optimized for both dirt and asphalt use.

Although a full range of genuine Honda accessories is available, for convenience, the company created three specially designed ready-to-go packs – Adventure Pack, Travel Pack, and Style Pack. I won't bore you with the exact items; you can find more info about them and the CL500 on Honda's official website.

The CL500 is relatively cosmetically similar to the Rebel. But looks aren't all that important, and Honda has made sure to improve the motorbike's performance and make sure it can handle both city and dirt use. The middleweight scrambler sounds good in theory, but we look forward to seeing it out and about and how Honda's community will react to the CL series revival. 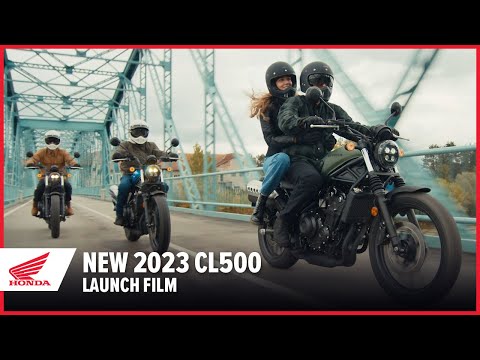